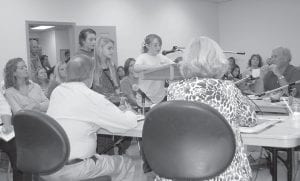 Parents and students crowded into the Letcher County Board of Education’s meeting room Monday night to ask the board to keep the Arlie Boggs and Beckham Bates elementary schools open.

Seats quickly filled in the Lendell Smith Memorial Conference Room of the Letcher County School Bus Garage on Monday night, and people stood at each of the three entranceways making it a standing room only crowd.

“I understand how communities feel about their school,” said Letcher Schools Supt. Anna Craft. “They don’t like change.”

The board has neither announced the schools will be closed nor voted on the matter. In July, the board authorized the creation of seven teams made up of parents, teachers, school administrators, board members and community members whose purpose is to study the question of whether elementary students should attend classes in separate schools from middle school students. The board asked the teams to examine the positives and negatives of having some schools made up of kindergarten through fifth-grade students and some schools made up of sixth-, seventh- and eighth-grade students.

The teams are each made up of 10 members and are broken down into categories including transportation, curriculum, personnel and staffing, transition, facilities and technology, communication and extracurricular activities. In December the teams will present the school board with a data package containing their conclusions.

Board Chairman Will Smith of Whitesburg said the board hasn’t made any decisions concerning consolidation.

“They have to sell it to me before I can be for it,” said Smith. “I’m not convinced of anything.” Board Member Dr. Sam Quillen Jr. of Neon said he would listen to the facts gathered during the study. Craft said she and the board will look at what is best for all students.

“Keep in mind the children and their education is number one,” said Craft.

Craft said only 14 of the 174 school districts in Kentucky now have schools with students ranging from kindergarten through eighth-grade. She said four of those districts don’t have high schools and the other 10 are located in eastern Kentucky.

“Academically, it is something we are looking at,” said Craft. “It’s the right thing for children.”

Those who addressed the board Monday night are against changing the school makeup and placing elementary students in certain schools and middle school students in others.

Mendy Boggs, president of the Parent Teacher Organization at Arlie Boggs Elementary at Eolia, said students in sixth, seventh and eighth grades aren’t emotionally ready to be in a middle school environment.

“None of us supports the consolidation,” said Boggs. “I just have to be honest. We’ve been talking about things we could do to improve our school.”

Boggs said she has talked to a couple of coal companies who are interested in financially supporting the school, but won’t contribute until the future of the school is known.

“Let us show the county Arlie Boggs can be a shining star,” said Boggs.

Arlie Boggs Elementary is the only school in Letcher County that is located on the Cumberland River side of Pine Mountain. If the school is closed, Boggs is concerned about children traveling in school buses across Pine Mountain.

“That mountain is a great blessing and a curse,” said Boggs, “I can tell you as a parent, crossing that mountain is my biggest worry when it comes to my children.

If you don’t want to go to school to start with why would you want to cross Pine Mountain for seven years?”

Boggs said she asked her daughter who attends Letcher County Central High School what she would do if the bus on which she was riding wrecked on the mountain.

“That scares me that a high school student doesn’t know what to do,” said Boggs.

Boggs said if her older child doesn’t know what to do, she worries that younger children won’t be prepared either. Boggs asked the board to consider having a mock disaster drill to help students be better prepared in case of an accident.

Craft agreed with Boggs that a drill should be held.

“We need to have our children aware,” said Craft. “If the driver is injured, we haven’t told them who is in charge.”

Nicole Lee, a student at Beckham Bates Elementary School, told the board she wants her school to stay open as well.

“Our classmates don’t want the school to shut down,” said Lee. “We have been here since we were little kids.”

Stephanie Cornett, a granddaughter of Beckham Bates, for whom the school was named, said her grandfather was a very strong supporter of education and donated land at Colson in the 1960s for a school to be built on the site.

“The building in that area is a staple,” said Cornett.

Parents are also concerned about changes with re-districting. Pam Anderson told the board she transports her granddaughter to West Whitesburg Elementary School, which is out of her district, and doesn’t want her to attend any other school. Anderson said her granddaughter is involved in several activities at the school including cheerleading, Girl Scouts and Bible club.

“I transport her in the mornings and pick her up. That is no cost to you,” said Anderson. Craft said the board hasn’t made any decisions as far as re-districting. The transportation committee hasn’t finished gathering population data.

“We haven’t gotten that far yet,” said Craft. “That is something that hasn’t been determined.”

Anderson said WWES is the only school in the district with an afterschool daycare program. Craft said she is looking into getting daycares at other schools.

District One Magistrate Bobby Howard said Arlie Boggs and Beckham Bates are worth investing in and asked the board to reconsider closing the schools.

“Crossing this mountain is a danger,” said Howard. “I’m for saving money, don’t get me wrong. I’m more for saving kids’ lives.”

April Stephens, a coach at Arlie Boggs, said she drives her children 30 minutes one way to attend the school because it is the best fit for her children.

“I fell in love with that school,” said Stephens. “It is about our kids and it is our decision as parents. Why should I have to send my kid to a school that isn’t as successful?”

Lisa Breeding asked the board if parents need to attend every board meeting until the issue is resolved.

“You are welcome,” said Craft.

Smith said the board will look into finding a larger meeting room for the coming board meetings.