Students pleased to get letter from Prez 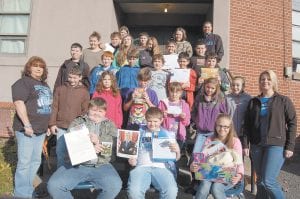 It had been almost two months since Arlie Boggs Elementary School fifth graders James Calton and Jacob Maggard mailed letters to President Barack Obama as part of a school project involving the literary character Flat Stanley, who can be mailed in an envelope all across the world since being flattened one night when a bulletin board fell on him while he was asleep.

Just when Jacob and James thought their letters might not be answered by America’s top leader, Arlie Boggs Principal Freddie Terry walked down a school hallway holding an envelope with The White House typed in the upper left hand corner. This was on Nov. 7, 55 days after the letters were mailed.

“I thought maybe he wouldn’t send it back because it took too long,” said James.

Jacob and James as well as the rest of the class watched closely as Terry pulled their two Flat Stanley paper dolls from the envelope.

“When it came back, I was excited,” said James. “Everybody was shocked that we got a letter back.”

Enclosed with the paper dolls was a signed letter from Obama, an autographed photograph of Obama, a diagram of the White House, a photo of the Obama family dog and information about the president.

Jacob and James are fascinated that the Presidential seal is located at the top of the typed letter.

“Thank you for sending Flat Stanley to the White House,” wrote Obama in a letter dated Oct. 30. “I am pleased to report that he worked hard, listened carefully and had a lot of fun.”

Obama said Flat Stanley’s visit came at a time of great hope and opportunity for America.

“He mentioned how much you wanted to learn about what goes on at the White House, and I was happy to have him join me on my daily activities,” wrote Obama. “In the morning, he walked with me through the halls of the West Wing and joined me for meetings in the Oval Office with my senior staff and any guests.”

“We always enjoy having visitors at the White House,” Obama wrote to the students.

The President told the students that Flat Stanley was surprised by the important roles reading, writing, math and science all play in the job of President of the United States.

“As a lifelong student, and as President, I use these skills every day,” wrote Obama. “I can tell you with certainty that whatever path you choose, the things you learn in school and the extra reading and exploration you do outside of school will always be helpful to you in your life.”

Obama said Flat Stanley was engaging, interested and showed up to the White House with a pencil in his hand ready to learn.

“It was a pleasure to have him here,” wrote Obama. “As I send him back to you, I urge you to bring that same thirst for knowledge to your classroom and passion for serving others to your community. Together, we will make America even better in the years to come.”

Boggs said the class will soon research how long it takes for a letter to reach Obama’s desk in the Oval Office.

An estimated 65,000 letters arrive each week at the White House and 10 letters are chosen daily for Obama to read and answer himself, according to www.whitehouse.gov.

James and Jacob were among 28 students in Myrtle Boggs’s language arts and social studies classes who drew and colored paper dolls and mailed the Flat Stanleys with letters to people scattered in various parts of the world.

The literary character served as an icebreaker for the students to write letters asking relatives, strangers and even a few famous figures to let Flat Stanley go on adventures in their areas and then send back a response letting students learn from Flat Stanley’s adventures.

ABES students walked with teachers to the Eolia Post Office on Sept. 13 and mailed letters with Flat Stanleys tucked inside the envelopes. Days and weeks passed and letters addressed to ABES were delivered to the school.

Students have eagerly learned about towns and cities by reading letters written by residents in Michigan, Oklahoma, South Carolina, Colorado, Alaska, Nebraska, Tennessee, Virginia and New York. Some of the correspondents included maps, brochures and photographs. A few of the photos included Flat Stanley in front of town landmarks and landscapes.

Alaina Epling was the first in her class to receive a letter back from a recognizable name. She was thrilled to receive a form letter from famous author J.K. Rowling, the author of the Harry Potter series. Alaina also got a letter from Linda Schenker, a Scholastic Book Group employee, who told Alaina about Flat Stanley’s visit to New York City.

“It’s actually pretty cool that we get stuff from famous people and they don’t throw it in the trash,” said Seth Terry.

Isaac Wiginton said he wants to write letters to famous people without using Flat Stanley as a buffer.

“I think this is really cool that we got letters back from famous people that care,” said Isaac. “It makes me want to send letters to other leaders in other countries.”

Mostly, classmates of Jacob and James have decided to write letters to country musicians and singers. Miranda Lambert, Blake Shelton, Carrie Underwood, Brantley Gilbert, Luke Bryan, Garth Brooks and Aaron Tippin may be getting letters soon from students at the small Eolia school. Letters will probably be mailed to comedian and actor Jim Carrey, film directors George Lucas and Peter Jackson, boy band members of One Direction and the cast of Duck Dynasty.

Although most letters delivered to ABES aren’t from celebrities, students appreciate every letter they receive because someone has taken time to answer their questions — and students are learning from those letters, said Mrs. Boggs.

Leah Sturgill received a package last week from a friend she met during this past summer at a horse camp at the Stables at Creekside Glen in Partridge. The friend, who lives in Texas, sent Leah a cowboy hat, a lasso and a bunch of photographs.

Nicholas Sturgill said the Flat Stanley Project has created a way for him to communicate with an aunt who lives in Michigan.

“We are talking to her a lot more now,” said Nicholas.

If you would like to send a letter describing your community to the ABES fifth- and sixth-grade classes, write to ABES, P.O. Box 86, Eolia, Ky. 40826.