Students post huge gains on testing, board is told

Board rehires Hall as its attorney, OK’s out-of-town trips 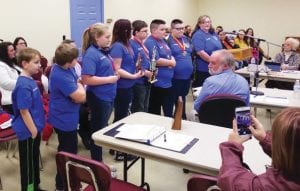 SHOWING THEIR MEDALS – Members of the Letcher Elementary School academic team presented themselves and their medals before the Letcher County Board of Education at its regular meeting Monday night. Left to right are Spencer Warlick, Zachary Gordon, Samantha Jones, Emma Caudill, Jacob Nicholas, Jaymz Bailey, Jaxyon Bailey, and Coach Kristi Hatton. Board chairman Will Smith is seated in front of the students.

Letcher County Central High School has seen “huge” gains in the percentage of students reaching benchmark scores on a test that predicts success on the ACT test, which is widely used as a qualifier for college enrollment.

Ronnie Goins, director of instruction for Letcher County Public Schools, told the board of education at its regular meeting Monday that the percentage of LCCHS juniors reaching the benchmark in the College Equipped Readiness Tool test given this semester has more than quadrupled, reaching 58.5 percent this spring semester, up from just 13.5 percent in the fall. In addition, the average composite score also increased for that grade, the age group that normally takes the ACT.

The composite is the overall score on English, math, reading, and science.

While Goins said he cannot predict how closely the CERT test will correlate the ACT scores, but gains in the CERT scores are encouraging. The University of Kentucky, for example, required a minimum ACT score of 23 for enrollment. The highest students can score on the ACT is 36.

According to figures Goins gave the board, the composite on the CERT test increased to 20 this semester, up from 15 in the fall. The largest subject gain was in reading, where scores went up 8 points in the spring, to 22 from 14 in the fall.

Gracie Maggard, principal at LCCHS, said Tuesday that the school changed to the CERT test two years ago because it aligns more closely to the ACT. Both tests score on a scale of 0-36, and the skills tested are supposed to be closely related. Maggard said the CERT test provides an individualized report that teachers can look at to see where each student is having trouble. The school also has “Junior Studies” classes, limited to 15 students each, where eleventh-grade students get extra help with the academic skills colleges look for on entrance exams.

“Within the program itself, students can get online and pull up practice tests and skills practice to do on their own,” Maggard said.

Goins said 13 fewer students took the test in the spring, which would skew the percentage somewhat, but with 220 or so students in the class, it would not account for such a large increase in the percentage reaching benchmark.

Also at the board meeting Monday night, Letcher Elementary School students and teachers gave a presentation to the board about that school’s successes. Principal Rocky Craft said the school is shooting for five stars on the state tests next year. It is currently a three star school, but he noted that students scored above the state average in every category tested this year.

In other business, the board:

• Voted unanimously to hire Richardson Associates Architects of Whitesburg to design accessible restrooms for classrooms for developmentally delayed students and for students in the autism unit at Whitesburg Middle School. The new work will include a shower and changing room for those students, who currently have to walk through the gymnasium to the locker room if they need to be cleaned up during the school day.

• Heard a report from Caitlin Collier of the GEAR UP program that funding for that program will be reduced next year, the final year of the seven-year grant. GEAR UP, which stands for Gaining Early Awareness and Readiness for Undergraduate Programs, is a $135,000-per-year grant in Letcher County, and includes additional money for regional programs. It comes from the U.S. Department of Education and is intended to help lower-income students prepare and succeed in post secondary education. Collier said an application for continuation of the grant will be written next summer, when the current program ends.

• Heard a report from Regina Brown of the Letcher County Teachers Organization about legislation now before the General Assembly that could affect schools. Brown said it is still early in the session, and the LCTO is still examining the bills that have been filed.

“There are a lot of bills that have been filed that affect what you all do, and what we do every day. There’s some crazy stuff out there,” Brown said. “Some of them are good, some of them are downright scary.”

While she didn’t specify any of the “downright scary” bills, she said some are well-meaning bills, but have been written by people who don’t have a background in curriculum. Among those in that category, she said, are bills that would require classes in Native American and African-American history be added to school curriculum.

Board Chairman Will Smith said there are so many bills on education that have been filed, it is overwhelming for educators and school board members.

“Everybody has an education bill,” Smith said, adding that there are so many changes proposed to curriculum, “You won’t be able to keep up with them.”

• Rehired Darrell Hall as board attorney.

• Rehired Martha Whitaker as board secretary

• Hired Josh Yonts, the finance officer, as board treasurer.