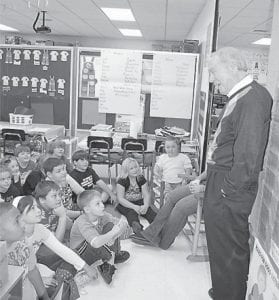 Rotarian Jack Burkich talked with students at West Whitesburg Elementary School about Rotary Club and the Dictionary Project. William Banks and Barbara Ison assisted Burkich with the distribution of the dictionaries.

The Rotary Club of Whitesburg recently presented every third grader in Letcher County with their very own dictionary.

Rotary Club members say they believe each student should have an opportunity to develop good reading skills and the dictionary is just one resource that can be used to accomplish this. During first and second grades, students learn to read, the Rotarians said, during third grade, students read to learn.

Research has shown that students who have a dictionary of their own are more likely to use it and use it more often than students who only have access to a classroom dictionary.

The Dictionary Project came about as a result of a woman named Anne Plummer from Savannah, Ga., who gave 50 dictionaries in 1992 to students at a close to where she lived. She continued doing this every year and throughout her lifetime she gave more than 17,000 dictionaries to children in Savannah. People heard about the project and did the same thing, and now third graders in all 50 states are receiving dictionaries.