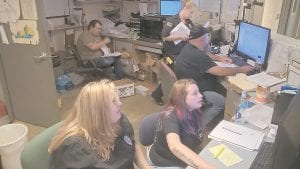 NEW INTERNS – Colleges are now placing interns from their criminal justice programs in the Letcher County Jail to learn what life on the inside is like for employee. Left to right are Deputy Jailer Donna Slone, Southeast Kentucky Community and Technical College intern Travis Williams (in back), Eastern Kentucky University intern Miranda Patrick, Deputy Jailers Angie Fields and Luther Tackett. (Photo by Sam Adams)

Some college students are spending time in jail this summer — not as prisoners, but as interns learning what they might face when they earn their degrees in criminal justice.

Letcher County Jailer Bert Slone said he started working on the internship program before he took office, and the jail now has several students working.

“I know there are a lot of people who are interested in criminal justice, and I wanted to help them out,” Slone said. “It gives them an opportunity to get a feel for the corrections part of criminal justice.”

Students work four hours a week doing filing, answering phones and “anything that’s appropriate for them to do,” Slone said.

This is the first time internships have been available at the jail, but students have done internships at the Letcher County Sheriff ’s Department and Whitesburg Police Department in past years, said Brian Fields, Criminal Justice Program Coordinator at Southeast Kentucky Community and Technical College.

Some of the students are Southeast students, but one is a student at Eastern Kentucky University.

“There are five core classes and three electives they (students) have to have,” Fields said. “Internship is one of the electives, but I believe it’s good for the students to do that because it gets them out to see what it’s like to actually work in this field.”

Students aren’t just placed in the internships. They have to go to Slone or the heads of other agencies where they want to work and apply for the positions. Fields said making them apply helps them learn how to search for jobs when they finish college.

“A lot of the students don’t have the people skills to approach people and ask them for a job,” Fields said.

“There’s an approval process, too,” he said, adding that students are vetted to make sure they’re suited to the internship before they’re allowed to work in the jail.

Criminal justice is taught at several of SKCTC campuses.

“Once they get the program completed at Southeast, they can actually get a bachelor’s through Eastern without ever leaving the county,” Fields said. He said enrollment for the program is still open for the fall.

Miranda Patrick, who finished the program at Southeast and has one semester at Eastern Kentucky University behind her, said so far she likes what she is doing, helping jail deputies with paperwork, but she hasn’t decided what she will do when she completes college.

“ I’m stuck between working at a jail like this, or substance abuse counseling,” she said.

Travis Williams is a student at Southeast and will transfer to EKU after the fall semester. Filing paperwork at the counter inside the jail, Williams said he is interested either in corrections or working with kids at a juvenile detention center.