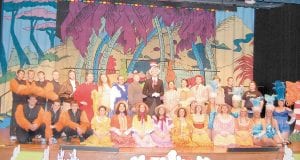 The Cat in the Hat, played by Matt Boggs, will be the master of ceremonies as Horton the Elephant, played by Joshua Stephens, attempts to save all of the Whos in Whoville.

Popular Dr. Seuss stories will be showcased in the production including “How the Grinch Stole Christmas!”, “Green Eggs and Ham” and “One Fish Two Fish Red Fish Blue Fish.”

Not so recognizable characters from “Yertle the Turtle and Other Stories,” “The Butter Battle Book” and “McElligot’s Pool” will also be a part of the show.

Gertrude McFuzz, a nerdy bird who is dissatisfied with a small tail feather, is unhappy when she meets Mayzie La Bird, who has an enormous, dazzling tail. Gertrude is played by Mychaela Starr and Mayzie is played by Dororthy Whitaker. 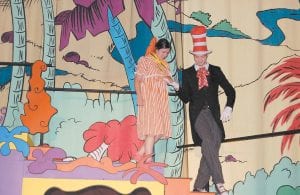 Erica Webb plays JoJo, the smallest Who of all, in the drama class’s production of “Seussical the Musical.” Matt Boggs plays The Cat in the Hat, probably the most recognizable Dr. Seuss character.

Yertle the Turtle, played by Kevin Collier, wants to be king of everything he can see so he tries to see as much of the surrounding land as he can and he doesn’t care who he hurts while reaching his goal.

At least 15 of 44 books written by Dr. Seuss will be incorporated into the production, which is under the direction of April Frazier and Jennifer Wampler and under the musical direction of Jessica Auvil.

Public performances, including a full orchestra, will be held at 7 p.m. on April 20 and April 21 in the LCCHS auditorium. General admission is $10. Reserved seating is $15. 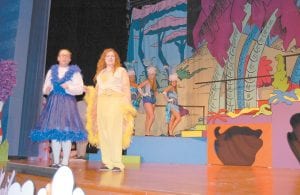 Mychaela Starr (left) plays Gertrude McFuzz, a bird who is dissatisfied with having a small tail feather. Dorothy Whitaker plays Mayzie La Bird, who has an enormous tail.