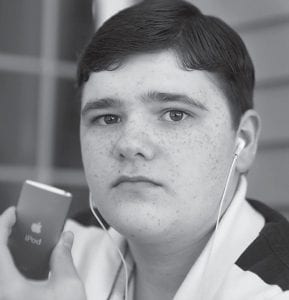 Matthew Brady, 17, of Foxborough, Mass., posed for a portrait in his home while wearing ear phones and displaying an iPod. (AP Photo)

A stunning one in five teens has lost a little bit of hearing, and the problem has increased substantially in recent years, a new national study has found.

Some experts are urging teenagers to turn down the volume on their digital music players, suggesting loud music through earbuds may be to blame — although hard evidence is lacking. They warn that slight hearing loss can cause problems in school and set the stage for hearing aids in later life.

“Our hope is we can encourage people to be careful,” said the study’s senior author, Dr. Gary Curhan of Harvard-affiliated Brigham and Women’s Hospital in Boston.

The prevalence of hearing loss increased from about 15 percent to 19.5 percent.

Most of the hearing loss was “slight,” defined as inability to hear at 16 to 24 decibels — or sounds such as a whisper or rustling leaves. A teenager with slight hearing loss might not be able to hear water dripping or his mother whispering “good night.”

Extrapolating to the nation’s teens, that would mean about 6.5 million with at least slight hearing loss.

Those with slight hearing loss “will hear all of the vowel sounds clearly, but might miss some of the consonant sounds” such as t, k and s, Curhan said.

“Although speech will be detectable, it might not be fully intelligible,” he said.

While the researchers didn’t single out iPods or any other device for blame, they found a significant increase in high-frequency hearing loss, which they said may indicate that noise caused the problems. And they cited a 2010 Australian study that linked use of personal listening devices with a 70 percent increased risk of hearing loss in children.

“I think the evidence is out there that prolonged exposure to loud noise is likely to be harmful to hearing, but that doesn’t mean kids can’t listen to MP3 players,” Curhan said.

The study is based on data from the National Health and Nutrition Examination Survey conducted by a branch of the Centers for Disease Control and Prevention. The findings appear in Wednesday’s Journal of the American Medical Association.

Loud music isn’t new, of course. Each new generation of teenagers has found a new technology to blast music — from the bulky headphones of the 1960s to the handheld Sony Walkmans of the 1980s.

Apple iPod users can set their own volume limits. Parents can use the feature to set a maximum volume on their child’s iPod and lock it with a code.

One of Fligor’s patients, 17-year-old Matthew Brady of Foxborough, Mass., recently was diagnosed with mild hearing loss. He has trouble hearing his friends in the school cafeteria. He ends up faking comprehension.

“I laugh when they laugh,” he said.

Fligor believes Brady’s muffled hearing was caused by listening to an iPod turned up too loud and for too long. After his mother had a heart attack, Brady’s pediatrician had advised him to exercise for his own health. So he cranked up the volume on his favorites — John Mellencamp, Daughtry, Bon Jovi and U2 — while walking on a treadmill at least four days a week for 30-minute stretches.

One day last summer, he got off the treadmill and found he couldn’t hear anything with his left ear. His hearing gradually returned, but was never the same.

Some young people turn their digital players up to levels that would exceed federal workplace exposure limits, said Fligor. In Fligor’s own study of about 200 New York college students, more than half listened to music at 85 decibels or louder. That’s about as loud as a hair dryer or a vacuum cleaner.

Habitual listening at those levels can turn microscopic hair cells in the inner ear into scar tissue, Fligor said. Some people may be more predisposed to damage than others; Fligor believes Brady is one of them.

These days, Brady still listens to his digital player, but at lower volumes.

“Do not blare your iPod,” he said. “It’s only going to hurt your hearing. I learned this the hard way.”