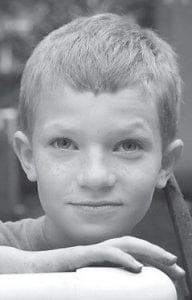 Leo Lytel, 9, was diagnosed with autism as a toddler. He was undiagnosed at age 9. (AP)

Leo Lytel was diagnosed with autism as a toddler. But by age 9 he had overcome the disorder.

His progress is part of a growing body of research that suggests at least 10 percent of children with autism can “recover” from it — most of them after undergoing years of intensive behavioral therapy.

Skeptics question the phenomenon, but University of Connecticut psychology professor Deborah Fein is among those convinced it’s real.

She presented research last week at an autism conference in Chicago that included 20 children who, according to rigorous analysis, got a correct diagnosis but years later were no longer considered autistic.

Among them was Leo, a boy in Washington, D.C., who once made no eye contact, who echoed words said to him and often spun around in circles — all classic autism symptoms. Now he is an articulate, social third-grader. His mother, Jayne Lytel, says his teachers call Leo a leader.

The study, funded by the National Institute of Mental Health, involves children ages 9 to 18.

“Even though a number of us out in the clinical field have seen kids who appear to recover,” it has never been documented as thoroughly as Fein’s work, Dawson said.

“We’re at a very early stage in terms of understanding” the phenomenon, Dawson said.

Previous studies have suggested between 3 percent and 25 percent of autistic kids recover. Fein says her studies have shown the range is 10 percent to 20 percent.

But even after lots of therapy — often carefully designed educational and social activities with rewards — most autistic children remain autistic.

Recovery is “not a realistic expectation for the majority of kids,” but parents should know it can happen, Fein said.

Doubters say “either they really weren’t autistic to begin with … or they’re still socially odd and obsessive, but they don’t exactly meet criteria” for autism, she said.

Fein said the children in her study “really were” autistic and now they’re “really not.”

University of Michigan autism expert Catherine Lord said she also has seen autistic patients who recover. Most had parents who spent long hours working with them on behavior improvement.

But, Lord added, “I don’t think we can predict who this will happen for.” And she does not think it’s possible to make it happen.

The children in Fein’s study, which is still ongoing, were diagnosed by an autism specialist before age 5 but no longer meet diagnostic criteria for autism. The initial diagnoses were verified through early medical records.

Because the phenomenon is so rare, Fein is still seeking children to help bolster evidence on what traits formerly autistic kids may have in common. Her team is also comparing these children with autistic and non-autistic kids.

So far, the “recovered” kids “are turning out very normal” on neuropsychological exams and verbal and nonverbal tests, she said.

The researchers are also doing imaging tests to see if the recovered kids’ brains look more like those of autistic or nonautistic children. Autistic children’s brains tend to be slightly larger than normal.

Imaging scans also are being done to examine brain function in formerly autistic kids. Researchers want to know if their “normal” behavior is a result of “normal” brain activity, or if their brains process information in a non-typical way to compensate for any deficits.

Results from those tests are still being analyzed.

Most of the formerly autistic kids got long-term behavior treatment soon after diagnosis, in some cases for 30 or 40 hours weekly.

Many also have aboveaverage IQs and had been diagnosed with relatively mild cases of autism. At age 2, many were within the normal range for motor development, able to walk, climb and hold a pencil.

Significant improvement suggesting recovery was evident by around age 7 in most cases, Fein said.

None of the children has shown any sign of relapse. But nearly threefourths of the formerly autistic kids have had other disorders, including attention deficit problems, tics and phobias; eight still are affected.

Jayne Lytel says Leo sometimes still gets upset easily but is much more flexible than before.