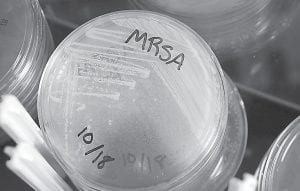 Plates of methicillin-resistant Staphylococcus aureus (MRSA) are seen in the Center for Disease Control’s healthcare-associated infections laboratory. A recent study of hospitals found that decontaminating all intensive care patients by using antiseptic wipes and giving them an antibiotic nose ointment dramatically reduced bloodstream infections from germs that include MRSA. (AP Photo/Center for Disease Control)

Infections in U.S. hospitals kill tens of thousands of people each year, and many institutions fight back by screening new patients to see if they carry a dangerous germ, and isolating those who do. But a big study suggests a far more effective approach: Decontaminating every patient in intensive care.

Washing everyone with antiseptic wipes and giving them antibiotic nose ointment reduced bloodstream infections dramatically in the study at more than 40 U.S. hospitals.

The practice could prove controversial, because it would involve even uninfected patients and because experts say it could lead to germs becoming more resistant to antibiotics. But it worked better than screening methods, now required in nine states.

The study found that 54 patients would need to be decontaminated to prevent one bloodstream infection.

Nevertheless, the findings are “very dramatic” and will lead to changes in practice and probably new laws, said Dr. William Schaffner, a Vanderbilt University infectious disease specialist who was not involved in the research. Some hospitals are already on board.

The study targeted ICU patients, who tend to be older, sicker, weaker and most likely to be infected with dangerous bacteria, including drug-resistant staph germs.

The decontamination method worked like this: For up to five days, 26,000 ICU patients got a nose swab twice a day with bacteria fighting ointment, plus once-daily bathing with antiseptic wipes.

Afterward, they were more than 40 percent less likely to get a bloodstream infection of any type than patients who had been screened and isolated for a dangerous germ called MRSA, or methicillin-resistant Staphylococcus aureus.

In the year before the experiment began, there were 950 bloodstream infections in intensive care patients at the hospitals studied. The results suggest that more than 400 of those could have been prevented if all hospitals had used the decontamination method.

“ We’ve definitively shown that it is better to target high-risk people,” not high-risk germs, said lead author Dr. Susan Huang, a researcher and infectiousdisease specialist at the University of California, Irvine.

The hospitals in the study are all part of the Hospital Corporation of America system, the nation’s largest hospital chain. HCA spokesman Ed Fishbough said the 162-hospital company is adopting universal ICU decontamination.

The study was published online in the New England Journal of Medicine.

The study focused on the MRSA germ. It can live on the skin or in the nose without causing symptoms but can be life-threatening when it reaches the bloodstream or vital organs. It is especially dangerous because it is resistant to many antibiotics.

About a decade ago, hospital linked invasive MRSA infections sickened more than 90,000 people nationwide each year, leading to roughly 20,000 deaths.

As hospitals improved cleanliness through such measures as better handwashing and isolating carriers of deadly germs, those numbers dropped by about a third, with fewer than 10,000 deaths in 2011, according to the Centers for Disease Control and Prevention.

The CDC has been recommending screening and isolation in certain cases. Now it’s having experts review the results and help determine whether the agency should revise its recommendations, said the CDC’s Dr. John Jernigan.

“It is a very important finding. It advances our understanding of how best to control infections caused by MRSA” and other germs, Jernigan said.

The CDC and the federal Agency for Healthcare Research and Quality helped pay for the study. Dr. Carolyn Clancy, who heads the research agency, said the findings have “the potential to influence clinical practice significantly and create a safer environment where patients can heal without harm.”

Jernigan said the decontamination approach is much simpler than screening and isolation. But he said its costs need to be studied.

Huang said the five-day nose treatment costs about $35 for brand-name ointment but only $4 for a generic version. The antiseptic wipes cost only about $3 to $5 more per day than usual washing methods, she said. But those costs might be offset by other savings from avoiding widespread screening and isolation, she said.

Intensive care patients are already routinely bathed. The study just swapped soap with wipes containing a common antiseptic. Some study authors have received fees from makers of antiseptic wipes or have done research or unpaid consulting for those companies.

The nose ointment treatment is more controversial because it could cause more germs to become resistant to the antibiotic, Jernigan said.

“That’s something we’re going to have to very closely monitor if this practice is implemented widely,” he said.

Editorial co- author Dr. Michael Edmond said his university’s hospital is among those that already use antiseptic wipes on ICU patients.

While MRSA screening and isolation is widely accepted, Edmond said that approach “takes a toll on patients.” Isolating patients who test positive for MRSA but don’t have symptoms makes patients angry and depressed, and studies have shown that isolated patients are visited less often by nurses and tend to have more bedsores and falls, he said.