Study finds no cause of ‘illness’ 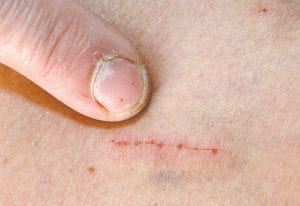 A patient who claims to suffer from a rare infliction called Morgellons points to a sore from where she believes bugs related to the condition emerged. Results of a Centers for Disease Control study conclude that Morgellons exists only in the patients’ minds. (AP Photo)

Imagine having the feeling that tiny bugs are crawling on your body, that you have oozing sores and mysterious fibers sprouting from your skin. Sound like a horror movie? Well, at one point several years ago, government doctors were getting up to 20 calls a day from people saying they had such symptoms.

Many of these people were in California and one of that state’s U.S. senators, Dianne Feinstein, asked for a scientific study. In 2008, federal health officials began to study people saying they were affected by this freakish condition called Morgellons.

The study cost nearly $600,000. Its long-awaited results conclude that Morgellons exists only in the patients’ minds.

“We found no infectious cause,” said Mark Eberhard, a Centers for Disease Control and Prevention official who was part of the 15-member study team.

The study appears in PLoS One, one of the Public Library of Science journals.

Sufferers of Morgellons (mor-GELL-uns) describe a variety of symptoms, including fatigue, erupting sores, crawling sensations on their skin and — perhaps worst of all — mysterious red, blue or black fibers that sprout from their skin. Some say they’ve suffered for decades, but the syndrome wasn’t named until 2002, when “ Morgellons” was chosen from a 1674 medical paper describing similar symptoms.

Afflicted patients have documented their suffering on websites and many have vainly searched for a doctor who believed them. Some doctors believe the condition is a form of delusional parasitosis, a psychosis in which people believe they are infected with parasites.

Last May, Mayo Clinic researchers published a study of 108 Morgellons patients and found none of them suffered from any unusual physical ailment. The study concluded that the sores on many of them were caused by their own scratching and picking at their skin.

The CDC study was meant to be broader, starting with a large population and then went looking for cases within the group. The intent was to give scientists a better idea of how common Morgellons actually is.

They focused on more than 3 million people who lived in 13 counties in Northern California, a location chosen in part because all had health insurance through Kaiser Permanente of Northern California, which had a research arm that could assist in the project. Also, many of the anecdotal reports of Morgellons came from the area.

Culling through Kaiser patient records from July 2006 through June 2008, the team found — and was able to reach — 115 who had what sounded like Morgellons. Most were middleaged white women. They were not clustered in any one spot.

That led to the finding that Morgellons occurred in roughly 4 out of every 100,000 Kaiser enrollees. “So it’s rare,” Eberhard said.

Roughly 100 agreed to at least answer survey questions, and about 40 consented to a battery of physical and psychological tests that stretched over several days.

Blood and urine tests and skin biopsies checked for dozens of infectious diseases, including fungus and bacteria that could cause some of the symptoms. The researchers found none that would explain the cases.

There was no sign of an environmental cause, either, although researchers did not go to each person’s house to look around.

They took fibers from 12 people, which were tested at the Armed Forces Institute of Pathology. Nothing unusual there, either. Cotton and nylon, mainly — not some kind of organism wriggling out of a patient’s body.

Skin lesions were common, but researchers concluded most of them were from scratching.

What stood out was how the patients did on the psychological exams. Though normal in most respects, they had more depression than the general public and were more obsessive about physical ailments, the study found.

However, they did not have an unusual history of psychiatric problems, according to their medical records. And the testing gave no clear indication of a delusional disorder.

So what do they have? The researchers don’t know. They don’t even know what to call it, opting for the label “unexplained dermopathy” in their paper.

But clearly, something made them miserable. “The absence of evidence is not evidence of absence,” said Felicia Goldstein, an Emory University neurology professor and study co-author.

She said perhaps the patients could be helped by cognitive behavioral therapy that might help them deal with possible contributing psychological issues.

The study is not expected to be the last word on the subject.