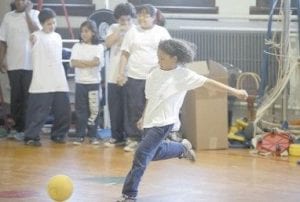 Injuries to American children during physical education classes increased by 150 percent from 1997-2007, a new study finds, a possible drawback to a movement encouraging more vigorous exercise in schools.

Yet that may have less to do with lively gym programs than with lack of adult supervision, experts said. A decline in school nurses and larger class sizes could be to blame, said the study’s senior author Lara McKenzie of Nationwide Children’s Hospital in Columbus, Ohio.

“Children got hurt by running into equipment or having contact with structures or other persons,” McKenzie said. “They had heat stroke, fainting and heart palpitations.” Boys had more cuts and broken bones than girls. Girls were more likely to suffer strains and sprains.

While the benefits of physical education classes outweigh the risks, McKenzie said, “being healthy doesn’t have to hurt.”

The study, based on hospital reports of phys ed injuries, was released Monday and appears in the September edition of Pediatrics. It suggests schools should renew their efforts to make gym class safer, said Cheryl Richardson of the National Association for Sport and Physical Education in Reston, Va.

“Classroom teachers who aren’t trained in P.E. might not recognize situations that can cause injury,” Richardson said. Certified physical education teachers know where to position themselves, the amount of space children need around them for activities and proper warmup exercises.

The federal Healthy People 2010 initiative has made it a goal to improve P.E. programs. That’s led to more state policies supporting physical education, but not all schools comply because the policies aren’t usually accompanied by funding to support them, Richardson said.

For the study, researchers analyzed emergency room reports of P.E.-related injuries in children, ages 5 to 18. The data came from 100 representative U.S. hospitals taking part in surveillance for the U.S. Consumer Product Safety Commission.

Rates per 10,000 students in those age groups also increased. The researchers weren’t able to calculate a rate based on numbers of children taking gym classes, which would have given a more accurate picture. Based on other studies, the researchers believe there’s been only a slight increase in P.E. participation and only in the past few years.

“Physical education in schools is one of our main tools to increase physical activity and prevent childhood obesity,” McKenzie said.

On the Net: Pediatrics: www.pediatrics.org