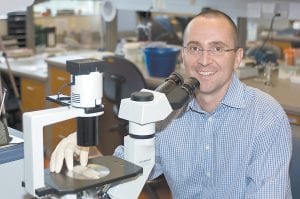 Dr. Stuart Turvey in the lab in Vancouver, British Columbia, Canada. Dr. Turvey is a pediatric immunologist at BC Children’s Hospital, and the Aubrey J. Tingle Professor of Pediatric Immunology at the University of British Columbia. Turvey is co-author of a new study that suggests not having enough of certain “good” intestinal germs early in life may increase babies’ risk of developing asthma. (BC Children’s Hospital via AP)

Gut checks suggest that not having enough of certain “good” intestinal germs early in life may increase babies’ risk of developing asthma, according to a new study of more than 300 children.

Wait: What could gut bacteria have to do with a lung disease? We share our bodies with trillions of microbes that play key roles in keeping us healthy — and different combinations of bacteria in the gut are thought to shape the immune system in ways that can affect the risk of a variety of diseases.

“I want to emphasize that we’re not ready for that yet,” cautioned study co-author Dr. Stuart Turvey, a pediatric immunologist at the University of British Columbia and BC Children’s Hospital. But a “vision for the future would be to prevent this disease.”

Asthma has been on the rise in recent decades, and is estimated to affect 300 million people worldwide and nearly 10 percent of U.S. children. While medications can help control the wheezing and airway inflammation, asthma is a common reason for childhood hospitalizations and severe attacks can be lifethreatening at any age.

Babies begin accumulating their own custom bacterial community, or microbiome, at birth. Which bugs they acquire is a haphazard process, starting with whether they were born vaginally or by C-section. But previous studies have shown that babies treated with antibiotics before their first birthday were more likely to be diagnosed later with asthma; the drugs can kill good germs as well as harmful ones.

In the new study, the University of British Columbia tracked health records of 319 children from birth to age 3, and analyzed stool samples taken during infancy to check their gut bacteria.

The first clue: There were 22 youngsters deemed very high risk because of early asthma warning signs — and at 3 months of age, all of them harbored much lower levels of four specific gut bacteria than the other babies.

That doesn’t prove the missing bugs are protective. In a first step to tell, the researchers infected germ-free mice with an atrisk tot’s stool sample alone, or with a supplement of the four supposedly “good” bacteria. Restoring the missing bugs markedly reduced airway inflammation in the mice’s offspring, they reported in the journal Science Translational Medicine.

“This is a really important study” because of that mouse evidence that altering bacteria affects symptoms, said Dr. Rachel Rosen, a gastroenterology specialist at Boston Children’s Hospital who wasn’t involved with the research. “Just knowing that’s possible opens up a whole field of using bacteria as a therapy for lung disease.”

Researchers don’t know much about how people naturally acquire these four bacteria groups with tongue-twisting names — Faecalibacterium, Lachnospira, Veillonella and Rothia — that the Canadian team abbreviated the FLVR combination.

But stool samples from 1-year-olds didn’t show much difference between the at-risk group and the rest, suggesting the first three months of life may be a critical time period, the researchers concluded.

“There’s this really early dance in the gut” that influences the immune system, said University of British Columbia microbiology professor B. Brett Finlay.

For now, the consumer message is to stay tuned: Much larger studies are needed to prove the bacterial role, and that timing theory, Rosen cautioned. Plus, gut bacterial checks are part of research, not routine care.