Study: Good heart attack care could add a year to your life 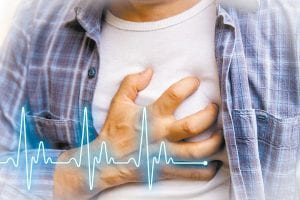 Researchers found that roughly 17 years after a heart attack, average life expectancy was 9 to 14 months longer for patients who had been treated at highly-rated hospitals. (Shutterstock)

Going to the right hospital for heart attack care could add a year to your life, a new study suggests.

Using Medicare records, researchers found that roughly 17 years after a heart attack, average life expectancy was 9 to 14 months longer for patients who had been treated at hospitals that do best on widely used quality measures than for those treated at low-rated ones.

“Where you go really does matter,” not just for surviving the heart attack but also long-term, said Dr. Emily Bucholz, a study leader and researcher at Boston Children’s Hospital.

A year of life from highquality care is a big deal; consider that some cancer drugs won approval for adding a few months or weeks.

But if you’re having possible heart attack symptoms, don’t delay getting help because you’re worried about which hospital to go to, said another study leader, Yale cardiologist Dr. Harlan Krumholz.

“Just call 911. Too many people wait at home too long,” and any delay means more risk of permanent heart damage, he said.

The study was funded by the National Institutes of Health. Results were published by the New England Journal of Medicine.

Hospitals often are rated based on their heart attack death rates at 30 days, taking into account how sick their patients were, such as how many had diabetes. But it’s not known whether doing well in the short term translates to a lasting benefit.

The new study finds it does. Researchers compared life expectancy for 120,000 Medicare patients treated between 1994 and 1996 at roughly 1,800 hospitals. The difference in life expectancy at top and low performing hospitals emerged at 30 days and remained over time.

“This is really an important study,” said an independent expert, Dr. Ralph Brindis, a University of California at San Francisco cardiologist and former president of the American College of Cardiology. “Delivering better care not only saves lives, but that the gain persists over 17 years, independent of how sick the patients were initially.”

“Where the good hospitals in your community are is worth knowing,” Bucholz said.

And they’re not necessarily the ones that advertise on TV. Medicare has a website that lets you check how they do in your area and be prepared, especially if you or someone in your family is at high risk for a heart attack.

Heart attack symptoms can be sudden, but many start slowly, with mild pain or discomfort, according to the American Heart Association. Signs can include pressure, squeezing or pain in the chest, one or both arms, the back, neck, jaw or stomach; shortness of breath; breaking out in a cold sweat; nausea, or lightheadedness.