Study: Hospitals are too noisy 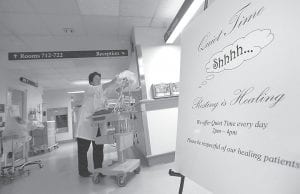 A sign was posted for “quiet time” while Nursing Director Theresa Capodilupo worked in the hall of the Surgical Trauma Unit at the Massachusetts General Hospital in Boston. Anyone who’s had a hospital stay knows the beeping monitors, the hallway chatter, the roommate, even the squeaky laundry carts all make for a not-so-restful place to heal. (AP Photo)

Anyone who’s had a hospital stay knows the beeping monitors, the pagers and phones, the hallway chatter, the roommate, even the squeaky laundry carts all make for a not-so-restful place to heal.

Hospitals need a prescription for quiet, and new research suggests it may not be easy to tamp down all the noise for a good night’s sleep.

In fact, the wards with the sickest patients — the intensive care units — can be the loudest.

“It’s just maddening,” says Dr. Jeffrey Ellenbogen, sleep medicine chief at Massachusetts General Hospital. He pointed to one study that found the decibel level in ICUs reaches that of a shout about half the time.

Patient satisfaction surveys are packed with complaints that the clamor makes it hard to sleep. Yet remarkably little is known about exactly how that affects patients’ bodies — and which types of noises are the most disruptive to shut-eye. So Ellenbogen and researchers from Harvard and the Cambridge Health Alliance recorded different kinds of hubbub in a community hospital in Boston’s suburbs to try to find out.

Since it wouldn’t be appropriate to experiment on sick people by disrupting their sleep, 12 healthy volunteers were enlisted. They spent three nights in Mass General’s sleep lab, slumbering as recorded hospital sounds blared from nearby speakers at increasing volumes.

Sure, a toilet flushing, voices in the hallway or the ice machine woke people once they were loud enough. But electronic sounds were the most likely to arouse people from sleep — even at decibel levels not much above a whisper, the researchers reported this week in the journal Annals of Internal Medicine.

What electronic sounds? Particularly troublesome was the beep-beep-beep from IV machines that signals someone needs more fluid or medicine, one of the most common machines in a hospital. They’re just one of a variety of alarms.

Those alarms are meant to alert hospital workers, of course, so the finding raises a conundrum. But some hospitals are testing ways to make at least some monitors flash signals at the nurses’ stations rather than sound loudly at the bedside.

The other surprises: The sleepers’ heart rates temporarily jumped as much as 10 beats a minute as they were aroused, the researchers reported. And they didn’t remember most of the disruptions even though brain recordings clearly showed their sleep was interrupted, which suggests that patients’ complaints are underestimating the problem.

“My God, we delivered 100 sounds to this person and woke them up 40 times and they’re reporting to us just a couple” of awakenings, Ellenbogen says with disbelief.

If healthy young adults had a pronounced change in heart rate, imagine the stress of alarms sounding all night long in an ICU full of frail, older patients with weakened hearts, he says.

“ It clearly has a big impact,” agrees Dr. Ivor Berkowitz of Johns Hopkins University in Baltimore. He’s a pediatric ICU specialist and wasn’t involved with the research but calls it compelling and would like to see children studied in the same way.

Regularly getting too little sleep plays a role in a number of health troubles, from drowsy driving to high blood pressure, obesity, depression, memory problems and a weakened immune system. There’s been far less research on how much sleep disruption interferes with recovery from illness. But some studies show patients in noisier wards require more medications and sedatives. Delirium — a dangerous state of confusion and agitation — is linked to sleep deprivation and the loss of normal sleepwake cycles during certain hospitalizations, especially among older people, Ellenbogen notes.

Noise isn’t the only challenge. He says sometimes patients are awakened for a blood test or blood pressure check simply because the overnight nurse assigned the task goes off duty at 7 a.m.

Acoustical engineers from Johns Hopkins helped sound an alarm about hospital noise several years ago, reporting that the average level at night has risen dramatically over the past few decades. Now a number of hospitals have begun taking steps to muffle the noise.

Hopkins recently opened a new building constructed for quiet, and Berkowitz says the difference in the new pediatric ICU is stunning. Before, eight children’s beds were grouped together in two rooms linked by an opening — the sound of ventilators and machine alarms and conversation all bouncing around the area, he recalls. Now, every patient room is private.

“People have a sense, I think, of being calmer,” Berkowitz says. He doesn’t have any medical records to show it, but “my gut sense is that it’s better for patients.”

Existing hospital buildings, especially those without private rooms, require different techniques. For example, Mass General has posted “quiet hours” in the afternoon and at night on certain wards. The lights are dimmed, patients’ room doors are closed wherever possible, overhead paging is minimized, and health workers lower their voices and try not to enter rooms unless it’s really necessary, says Rick Evans, the hospital’s senior director for service.

In his office sits a gadget that looks like a traffic light, flashing yellow or red when the decibel level gets too high. Evans says the hospital is evaluating whether to start using some type of noise sensor for further help.

— If an IV alarm repeatedly sounds, “tell the nurse this has got to stop,” he says.

— Ask if it’s OK to close the room door.

— Request a fan in the room to be “white noise” that muffles the electronics.

— Speak up if hallway conversations are too loud.