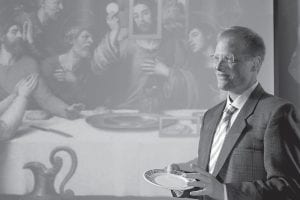 In this photo provided by Cornell University, Prof. Brian Wansink, holds a plate illustrating how food portion size has grown over the centuries while standing in front of a projection of Vicente Juan Masip’s (also known as Juan de Juanes) “The Last Supper.” (AP Photo/Cornell University)

Has even the Last Supper been supersized?

The food in famous paintings of the meal has grown by biblical proportions over the last millennium, researchers report in a medical journal.

If art imitates life, we’re in trouble, the researchers conclude. The size of the main dish grew 69 percent; the size of the plate, 66 percent, and the bread, 23 percent, between the years 1000 and 2000.

Supersizing is considered a modern phenomenon, but “what we see recently may be just a more noticeable part of a very long trend,” said Brian Wansink, a food behavior scientist at Cornell University.

The study was his idea. For biblical context, he sought help from his brother, Craig Wansink, professor of religious studies at Virginia Wesleyan College in Norfolk, Va., and an ordained Presbyterian minister.

The Bible says the Last Supper took place on a Passover evening but gives little detail on specific foods besides bread and wine.

“There’s nothing else mentioned. They don’t say there’s a fruit cup or carrot cake,” though other foods such as fish, eel, lamb and even pork have appeared in paintings through the years, Brian Wansink said.

For the study, he used paintings featured in the book “Last Supper,” published in 2000 by Phaidon Press. They include perhaps the most famous portrayal of the meal, by Leonardo da Vinci. Computer technology allowed them to scan, rotate and calculate images regardless of their orientation in the paintings.

Details are in the April issue of the International Journal of Obesity.

The study is “not very meaningful science,” said Martin Binks, a behavioral health psychologist and a consultant at Duke University Medical Center. “We have real life examples of the increase in portion size — all you have to do is look at what’s being sold at fastfood restaurants.”

A more contemporary test would be to analyze portion sizes in Super Bowl commercials, he suggested.

“That would be a much more meaningful snapshot of how this society’s relationship to food has changed,” Binks said.