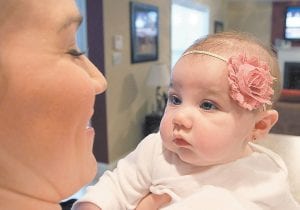 Janelle Valore holds her daughter Alena Valore, 5 months, who has colic, at their home in Mt. Joy, Pa. The distressing nonstop crying of colic in babies is often blamed on tummy trouble. But now a study says the problem could be linked with migraine headaches in at least some infants. (AP Photo/Chris Knight)

The distressing nonstop crying in babies with colic is often blamed on tummy trouble, but a new study says the problem could be linked with migraine headaches in at least some infants.

Children and teens treated for migraine headaches at three hospitals in Italy and France were much more likely than other kids to have had colic in infancy. The link has been suggested in other research, and if it can be proven, it could offer new hope for treating colic, the researchers said.

“Infantile colic causes pain in babies and high levels of stress in parents. Preventive therapies for migraine could therefore be an option in the future,” said study co-author Dr. Luigi Titomanlio, chief of a pediatric migraine clinic at Robert Debre Hospital in Paris.

More research is needed to prove any link between colic and migraines, and Titomanlio said studies would need to be done before anyone would recommend using migraine treatments for babies’ colic.

The study was published in the Journal of the American Medical Association.

An editorial in JAMA calls it important research and says if colic really is an early form of migraines that might explain why digestive treatments typically don’t help colic.

Definitive causes are uncertain for both colic and migraines.

Roughly 20 percent of U.S. infants have colic — intense crying spells lasting more than three hours a day, at least three days a week, for more than three weeks in an otherwise healthy baby. It usually starts a few weeks after birth. The symptoms are sometimes blamed on digestive problems including gas but experts say the true cause is unknown.

Migraine headaches are rare in very young children but by middle-school and teen years as many as 10 percent or more experience them.

The throbbing headaches are thought to be inherited and may be caused by some sort of irritation in nerve cells in the brain interacting with brain blood vessels.

The researchers said it could be that colic is caused by similar changes in nerves and blood vessels in the gut.

The study supports the idea that colic “may be an early life manifestation of migraine,” said Dr. Amy Gelfand, a neurologist at the University of California, San Francisco’s Headache Center. Her own research, published last year, found that infants whose mothers had migraines were more than twice as likely as other babies to have colic.

She noted that Tylenol is sometimes used to treat migraines in children, and pain in infants, but said whether it works for colic should be studied.

Janelle Valore of Mount Joy, Pa., said she was intrigued by the results. Her mother, sister and cousins all have migraines and were colicky as babies. Valore was spared both, but her 5-month-old daughter, Alena, just got over a nearly three-month bout with colic, and now she wonders if the baby will develop migraines later on.

“I always thought it was gas,” but treatments designed to relieve gas and tummy upsets didn’t work for her baby, Valore said.

She said her daughter would cry day and night “and I’d cry right along with her.”