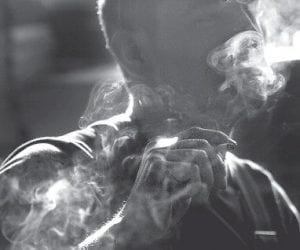 It may be riskier on the lungs to smoke cigarettes in 2009 than it was a few decades ago — at least in the U.S., says new research that blames changes in cigarette design for fueling a certain type of lung cancer. (AP Photo)

It may be riskier on the lungs to smoke cigarettes today than it was a few decades ago — at least in the U.S., says new research that blames changes in cigarette design for fueling a certain type of lung cancer.

Up to half of the nation’s lung cancer cases may be due to those changes, Dr. David Burns of the University of California, San Diego, told a recent meeting of tobacco researchers.

It’s not the first time that scientists have concluded the 1960s movement for lower-tar cigarettes brought some unexpected consequences. But this study, while preliminary, is among the most in-depth looks. And intriguingly it found the increase in a kind of lung tumor called adenocarcinoma was higher in the U.S. than in Australia even though both countries switched to so-called milder cigarettes at the same time.

“The most likely explanation for it is a change in the cigarette,” Burns said in an interview — and he cited a difference: Cigarettes sold in Australia contain lower levels of nitrosamines, a known carcinogen, than those sold in the U.S.

But anti-smoking advocates are citing the study as Congress considers whether the Food and Drug Administration should regulate tobacco, legislation that would give the agency power to decide such things as whether to set caps on certain chemicals in tobacco smoke.

Smokers once tended to get lung cancer in larger air tubes, particularly a type named “squamous cell carcinoma.” Then doctors noticed a jump in adenocarcinoma, which grows in small air sacs far deeper in the lung. Initial studies blamed introduction of filtered, lower-tar cigarettes. When smokers switched, they began inhaling more deeply to get their nicotine jolt, pushing cancercausing smoke deeper than before.

Burns’ study, presented at a meeting of the Society for Research on Nicotine and Tobacco, took a closer look. He compared smoking behaviors of different age groups over four decades — how much they smoked, when they started, when they quit — and how cancer-risk changed.

The risk of squamous cell carcinoma stayed about the same over those years, Burns found. But adenocarcinoma rose. It makes up 65 percent to 70 percent of newly occurring U.S. lung cancer cases, but no more than 40 percent of Australia’s lung cancer, he said.

While the nation’s total lung cancer cases have inched down as the number of smokers has dropped in recent years, the study suggests an individual smoker’s risk of getting cancer is higher.

It’s well known that cigarettes differ from country to country, because of different tobacco crops grown locally and smokers’ varying tastes. Nitrosamines are a byproduct of tobacco processing and levels vary for several reasons, including differences in curing practices.

Australian cigarettes contain about 20 percent of the nitrosamine content of U.S. cigarettes, making the chemical a prime suspect, concluded Burns, who has been scientific editor of several surgeon general reports on tobacco.

That doesn’t rule out a role for deeper inhaling, cautioned Dr. Michael Thun of the American Cancer Society: “There’s several strong suspects in the lineup. They may have acted in combination.”

Philip Morris USA spokesman David Sutton called the study speculative and hard to evaluate until it’s published in a medical journal, something Burns plans to do.

Be careful in assuming lower-nitrosamine cigarettes are less lethal, said Dr. Neal Benowitz of the University of California, San Francisco, a well-known tobacco expert. Lung cancer is only one of tobacco’s many risks — it causes heart disease and other killer diseases, too.

“If you reduce someone’s (lung cancer) risk by 10 percent, that’s not really meaningful for an individual,” he said. “The goal still is to get them to stop.”