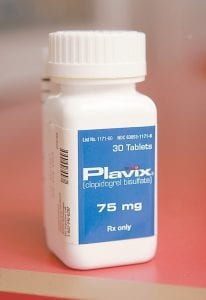 Millions of people with stents that prop open clogged heart arteries may need anti-clotting drugs much longer than the one year doctors recommend now. A large study found that continuing for another 18 months lowers the risk of heart attacks, clots and other problems.

Even quitting after 30 months made a heart attack more likely, raising a question of when it’s ever safe to stop. It’s a big issue because the drugs can be expensive and bring risks of their own. The result also is a surprise, because the trend has been toward shorter treatment, especially in Europe.

“It’s a wake-up call. It’s the opposite of where we’ve been going,” said Dr. Patrick O’Gara, clinical cardiology chief at Brigham and Women’s Hospital in Boston and president of the American College of Cardiology.

He had no role in the study, which was led by Brigham’s Dr. Laura Mauri, at the request of the federal Food and Drug Administration. Results were discussed early this week at an American Heart Association conference in Chicago and published online by the New England Journal of Medicine.

The FDA says it is mulling the results and that doctors should not change practice yet.

The study concerns care after angioplasty, a procedure done on millions of people worldwide each year. Through a blood vessel in the groin or an arm, doctors push a tube to the clog, inflate a tiny balloon to flatten it, and place a mesh tube called a stent to keep the artery open.

Early bare-metal stents didn’t work well — arteries tended to reclog quickly. Coated ones that ooze drugs to prevent that problem came out a decade ago but have their own drawback: a small risk of clots that occur months later, a serious type that often cause heart attacks and can kill.

To prevent that, people with drug-coated stents are told to take aspirin and a second type of anti-clotting drug for a year. But no one really knows how long the second drug is needed.

The study involved nearly 10,000 people who took aspirin plus either of the drugs Plavix or Effient for one year after getting a drug-coated stent. All stayed on aspirin for another 18 months, and half stayed on Plavix or Effi ent, too.

The added benefit of dual treatment came with a cost: more cases of moderate or severe bleeding. Still, the balance is in favor of continuing the drugs because bleeding rarely was serious, Mauri said.

A potential concern: There were more deaths from non- heart- related causes among those taking two drugs. Most were from cancer or trauma. Researchers looked back and found that more people with cancer at the outset of the study wound up in the two-drug group, perhaps explaining the difference.

The FDA is looking closely at the “unexpected finding,” but preliminary reviews of this study and previous ones “do not suggest an increased risk of death” from the drugs, said Mary Ross Southworth, a safety official at the agency.

Eight drug and device makers and a grant from the FDA paid for the study.

A separate part of the study looked at nearly 3,000 patients given bare-metal stents. It also found greater risks when the second anticlotting drug was stopped after a year.

Are the drugs needed indefinitely after a stent?

“It does raise that question,” O’Gara said. “Cost and possible side effects like bleeding might temper the decision” to stay on them, and each patient needs to discuss it with a doctor, he said. Older, frail people and those with frequent nosebleeds or who bruise easily may not want to take the drugs long-term.

Effient costs around $5 a pill; Plavix now is available in generic form for less than a dollar.

“The fewer pills that people have to take, the better,” so it’s important to look at which patients really need them, said Dr. Sidney C. Smith Jr., a former Heart Association president from the University of North Carolina at Chapel Hill. “If they’re not having any problems, it appears now there’s an advantage to continue.”