Study: Most eat too much salt 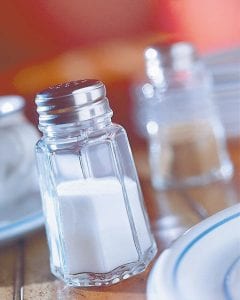 80 percent of the average American’s salt intake occurs without them salting their food. It comes from the salt in many packaged and processed foods and meals served in restaurants.

Seven out of 10 Americans should restrict their salt consumption, but very few of them do, according to a new government study.

About 145 million U.S. adults are thought to be more sensitive to salt — a group that includes anyone with high blood pressure, African-Americans and everyone older than 40.

That group should eat no more than about two-thirds of a teaspoon of salt each day. But only 1 in 10 people in that targeted group are meeting that guideline, according to estimates released by the Centers for Disease Control and Prevention.

“I don’t think ‘alarming’ is too strong” a term for describing the results, said Dr. Darwin Labarthe, director of the CDC’s Division for Heart Disease and Stroke Prevention.

Sodium increases the risk of high blood pressure, which is major cause of heart disease and stroke. Salt — or sodium chloride — is the main source of sodium for most people.

Health officials estimate that about 80 percent of the average American’s salt intake occurs without them salting their food. It comes from the salt in many packaged and processed foods and meals served in restaurants.

Salt reduction has become a recent focus of public health campaigns. New York City’s health department, the American Heart Association and nearly three dozen other organizations are trying to persuade food manufacturers and chain restaurants to reduce salt content by more than 50 percent over the next 10 years. The CDC and federal health agencies also having sodium-reduction talks with food companies.

The new CDC report provides valuable new information in quantifying how many at-risk people are getting too much salt, said Dr. Sonia Angell, of New York City’s health department.

“We’re eating way too much,” she said.

The government has a general recommendation that U.S. adults consume no more than 2,300 milligrams of sodium a day, or about one teaspoon of salt. But the government says that should be lower — 1,500 milligrams — for people who have high blood pressure or those in danger of getting it.

Researchers say the average adult is consuming about 3,500 milligrams a day. For those in the at-risk group, the average was a little lower — about 3,400 milligrams — but still more than twice what’s recommended.

The study also provided the government’s first estimate of how many adults are in the at-risk group, about 69 percent. That figure makes it clear that sodium content should be a concern for most Americans, Angell said.

The study is based on a comprehensive health survey done by the government that includes not only interviews and dietary surveys but medical tests. The results were based on about 8,000 survey participants from 1999 through 2006.

It’s unlikely that most adults will ever follow the government’s recommendations, said Richard Hanneman, president of the Salt Institute, a trade association representing the salt industry.