Study on docs may save lives 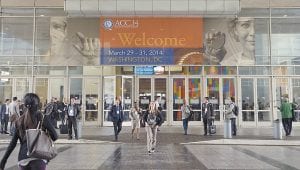 People attended the American College of Cardiology’s Annual Scientific Session and Expo in Washington. A new study published online in JAMA Internal Medicine, suggests survival chances were better for cardiac arrest patients and for the sickest heart failure patients if they were treated at teaching hospitals during the two biggest national cardiology meetings. But the study isn’t conclusive. (AP Photo)

Doctors joke that if you’re going to have a heart attack, the safest place would be at a big national gathering of heart specialists. But a new study suggests some older hospitalized heart patients may fare better when these doctors aren’t around.

Survival chances were better for cardiac arrest patients and for the sickest heart failure patients if they were treated at teaching hospitals during the two biggest national cardiology meetings, compared with those treated during weeks before and after the meetings. Also, some of the sickest heart attack patients got fewer invasive procedures during meeting days, versus those treated at other times — but that didn’t hurt their odds of surviving, the nineyear study found.

The findings were only at teaching hospitals, typically affiliated with medical schools and involved in doctor training and sometimes research; these are the workplaces for many doctors who attend major medical meetings. No differences were seen in death rates at non-teaching hospitals.

The evidence is only circumstantial and the study lacks information on whether the patients’ own doctors actually attended the meetings.

“The solution is not to get the cardiologists to have meetings every week,” said Dr. Anupam Jena, a Harvard Medical School economist and internist and the study’s lead author. Identifying specific treatments that were given or not given during meeting times would be a better solution that might lead to better outcomes, Jena said.

It might be that doctors who don’t attend the meetings are less inclined to try the most invasive treatments, and that a less intensive approach is better for the sickest patients, Jena said.

The study was published online in the JAMA Internal Medicine.

The research is provocative and might help doctors figure out how to lower patients’ death rates throughout the year, said Dr. Rita Redberg, the journal’s editor.

Redberg is a cardiologist at a teaching hospital at the University of California, San Francisco. She usually attends the national American College of Cardiology and American Heart Association meetings, but said she does not think her absences have affected patient outcomes.

The authors analyzed 30- day death rates for Medicare patients hospitalized during the annual meetings in the spring and fall, which typically draw thousands of doctors. Data included nearly 3,000 patients at teaching hospitals during meeting days from 2002 through 2011. The comparison group was about 18,000 patients hospitalized on the same days during the three weeks before and three weeks after the meetings.

The 30-day death rates for meeting-day versus nonmeeting days patients were:

— 60 percent versus 70 percent for cardiac arrests.

— 18 percent versus 25 percent for the sickest heart failure patients.

— No difference for the sickest heart attack patients: about 39 percent for both groups.

Among the heart attack patients, the meeting-days group had fewer heart stent procedures to open blocked arteries. The researchers found no difference in rates for a few invasive procedures for cardiac arrest and high-risk heart failure patients, but said there may have been differences in other treatments not included in the study that might explain the results.

Dr. Patrick O’Gara, president of the American College of Cardiology, said the study’s observational design makes it impossible to know if the national meetings had any effect on patients’ survival. He also noted that the number of heart doctors who attend the national meetings is a fraction of the nearly 30,000 cardiologists nationwide.

The American Heart Association echoed those comments in a statement and said the group does not recommend any changes in treatment based on the study.