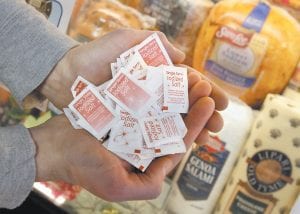 An employee holds packets of salt at a market in Cleveland. A large international study challenges the advice for most people to cut back on salt. Unless they have high blood pressure, the amount most folks consume is OK for heart health, and too little may be as bad as too much, the study suggests. (AP Photo)

A large international study questions the conventional wisdom that most people should cut back on salt, suggesting that the amount most folks consume is OK for heart health — and too little may be as bad as too much. The findings came under immediate attack by other scientists.

Limiting salt is still important for people with high blood pressure — and in fact, a second study estimates that too much sodium contributes to up to 1.65 million deaths each year. The studies both have strengths and weaknesses, and come as the U.S. government is preparing to nudge industry to trim sodium in processed and restaurant foods.

“ There are those who have made a career out of promoting extreme sodium reduction that will attack us,” he said. It’s better to focus on healthy lifestyles and overall diets instead of a single element, “and that is something everyone can rally around.”

No one should view this as permission to eat more salt, he said, adding that “most people should stay where they are.”

The studies are in the New England Journal of Medicine.

Yusuf’s is observational, rather than a strict experiment, and has big limitations in its methods. But its size lends strength — more than 100,000 people in 17 countries, the largest on this topic. It’s also from a general population, not just people at high risk of heart disease, as many past studies have been.

— Sodium levels generally correlate with the risk of high blood pressure. But this link is strongest when sodium intake is high and wasn’t seen at all when consumption is low. The link also is stronger as people age.

— People who consume 3 to 6 grams of sodium a day (about 8 to 15 grams of salt) had the lowest risk of heart problems or death from any cause during the nearly four-year study. More or less sodium raised risk. About three-fourths of the world’s population is in the ideal range. Americans average roughly 4 grams a day.

Guidelines from various groups for heart disease prevention recommend 1.5 to 2.4 grams of sodium a day. The American Heart Association advises no more than 1.5 grams.

“Too-high sodium is bad. Too low also may be bad, and sodium isn’t the whole story,” Strom said. “People should go for moderation.”

The study was sponsored by the McMaster institute, nonprofit and government groups and industry, but funders had no role in running it. The countries included Canada but not the United States; China accounted for 42 percent of participants. About 40 percent had high blood pressure.

Sodium levels were estimated from a single urine test instead of the preferred method of over 24 hours at multiple times, which Yusuf said was impractical in such a big group.

That drew criticism from a host of scientists.

“ This is a fundamental flaw” that undermines confidence in the results, said Dr. Elliott Antman, a Brigham and Women’s Hospital cardiologist who is president of the Heart Association.

Dr. Robert Eckel, a University of Colorado cardiologist and a former Heart Association president, said the single measure is a big limitation, but that researchers “did the best they could” in such a large study and that the findings still have some merit.

“ I find the potassium data of great interest” for potentially lowering risk, he said.

Dr. Martin O’Donnell of McMaster University, one of the researchers, said potatoes, bananas, avocados, leafy greens, nuts, apricots, salmon and mushrooms are high in potassium, and “it’s easier for people to add things to their diet than to take away” something like salt. e second study in the

Th journal, on how much sodium contributes to heartrelated deaths, was led by Dr. Dariush Mozaffarian of Tufts University and the Harvard School of Public Health, and funded by the Bill and Melinda Gates Foundation. Researchers looked at dozens of studies around the world on sodium intake, calculated its relationship to high blood pressure, and then the relationship of high blood pressure to cardiovascular deaths.

There were 1.65 million deaths from intake over 2 grams of sodium a day, they estimate, and half a million deaths based on current worldwide consumption of 4 grams a day, said Mozaffarian, who has consulted for some food makers.

His study is less controversial and shows why policies to curb salt are important, Michael Jacobson of the consumer group Center for Science in the Public Interest, wrote in an email.

The federal Food and Drug Administration is preparing voluntary guidelines asking industry to trim sodium in processed foods, the main source in the diet.

“The totality of the evidence strongly supports” limiting sodium, Antman said, and the Heart Association feels “now is the time for action and not hesitation anymore.”

“People don’t eat salt, they eat food,” she said. “Lots of people have high blood pressure and lots of people are getting older,” making salt a growing concern, she said. “That’s the context in which this is taking place.”