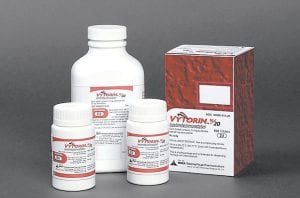 A major study gives a long-awaited answer on whether the blockbuster drugs Vytorin and Zetia lower the risk of heart problems. (AP Photo/Schering-Plough Corp.)

A major study is lifting a cloud around Zetia and Vytorin, blockbuster drugs for lowering cholesterol. The study found that these pills modestly lower the risk of heart attacks and other problems in people at high risk for them — evidence that’s been missing for more than a decade as the drugs racked up billions in sales.

Doctors have long focused on lowering LDL, or bad cholesterol, to prevent heart disease. Statins like Lipitor, Crestor and Zocor are the main medicines for this, and a lot of research shows they work.

Merck & Co.’s ezetimibe, which went on sale in 2002, lowers cholesterol in a different way. It’s sold as Zetia and, as a combo pill with Zocor, as Vytorin. The drug won Food and Drug Administration approval for lowering LDL, but some studies suggested that might not translate to fewer heart attacks and strokes. One study even questioned whether it raised the chance of cancer.

The new study found that people at high risk of heart problems who took Vytorin for seven years cut their risk of suffering one by 6 percent — by 8 percent if they took the drug most faithfully — compared to others taking just Zocor. Vytorin also proved safe.

“We’ve answered all the questions. Now we know that with this different way of lowering cholesterol, you can in fact prevent heart attacks and strokes,” said one study leader, Dr. Christopher Cannon of Brigham and Women’s Hospital in Boston.

“This is the first time that something added to statins has been shown to be benefi cial,” he added.

Results were revealed this week at an American Heart Association conference in Chicago.

“It expands the options,” especially for the many people who can’t tolerate a statin or get their cholesterol low enough on one, said Dr. Neil Stone, a Northwestern University cardiologist.

To be clear: The study doesn’t mean that Zetia and Vytorin can help people who have not yet suffered a heart problem. The 18,000 study participants either had a recent heart attack or worsening chest pain from a severely clogged artery. About 1.1 million people face this situation in the United States alone each year.

Average LDL levels went from 95 at the start of the study to 70 with Zocor and 54 with the combo pill Vytorin. About 15 percent of Zocor users had a heart attack versus 13 percent of those on Vytorin. Other heartrelated problems also were less common with Vytorin.

For every 56 people taking Vytorin for seven years, one additional heart attack, stroke or heart-related death would be prevented.

The study was sponsored by Merck and many doctors involved in it consult for the company or other heart drug makers.

Zetia and Vytorin had global sales of $4.25 billion in 2013. They cost about $6.50 per pill, and generic versions will be available in about two years.

High-dose statins may be a cheaper way to get LDL very low, but studies haven’t compared that option to adding Zetia or Vytorin.

One study leader who takes Zetia — Duke University’s Dr. Robert Califf — said many on it are like him, unable to tolerate a high enough dose of a statin to drop LDL low enough.

The results also boost the prospects for newer drugs many companies are developing to lower cholesterol even more. They block PCSK9, a substance that interferes with the liver’s ability to remove cholesterol from the blood.

“ It’s a bit of a limbo dance,” said Dr. Lori Mosca, a cardiologist from Columbia University and New York-Presbyterian Hospital, and an American Heart spokeswoman. “How low can you go before you get no more benefit?”