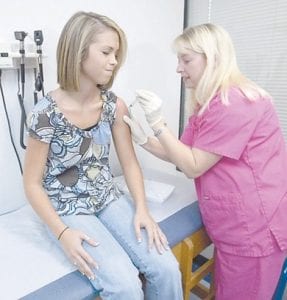 Lauren Fant, then 18, winced as she had her third and final application of the HPV vaccine administered by nurse Stephanie Pearson at a doctor’s office in December 2007 in Marietta, Ga. A new study says the shots that protect against cervical cancer do not make girls promiscuous. (AP Photo)

Shots that protect against cervical cancer do not make girls promiscuous, according to the first study to compare medical records for vaccinated and unvaccinated girls.

The researchers didn’t ask girls about having sex, but instead looked at “markers” of sexual activity after vaccination against the sexually transmitted human papillomavirus, or HPV. Specifically, they examined up to three years of records on whether girls had sought birth control advice; tests for sexually transmitted diseases or pregnancy; or had become pregnant.

Very few of the girls who got the shots at age 11 or 12 had done any of those over the next three years, or by the time they were 14 or 15. Moreover, the study found no difference in rates of those markers compared with unvaccinated girls.

The study involved nearly 1,400 girls enrolled in a Kaiser Permanente health plan in Atlanta. Results were published online this week in Pediatrics.

Whether vaccination has any influence on similar markers of sexual activity in older teens wasn’t examined in this study but other research has suggested it doesn’t.

The study is the first to use medical outcomes data to examine consequences of HPV vaccination and the results are “comforting and reassuring,” said lead author Robert Bednarczyk, a researcher at Kaiser and Emory University. Both institutions paid for the study.

The federal Centers for Disease Control and Prevention and the American Academy of Pediatrics recommend HPV shots for girls and boys at age 11 or 12, before they have ever had sex. Three doses are generally recommended over six months.

Some parents have raised concerns that the shots “are a license to have sex,” but the study bolsters evidence against that concern, said Dr. Elizabeth Alderman, an adolescent medicine specialist at The Children’s Hospital at Montefiore in New York City. She was not involved in the study.

A CDC study published in January suggested that the shots don’t promote sexual activity among older girls, but it relied on selfreporting, at ages 15 to 24. That’s a less reliable method than the new study, Alderman said. She has been a paid speaker for Merck & Co., which makes one of the two HPV vaccines sold in the United States, but said she has no current financial ties to the company.

In the new study, at least 90 percent of vaccinated and unvaccinated girls did not seek pregnancy tests, chlamydia tests or birth control counseling, markers that were considered surrogates for sexual activity during up to three years of follow-up. Two in each group became pregnant. Chlamydia, a common sexually transmitted disease, was diagnosed in one vaccinated girl and three unvaccinated girls.