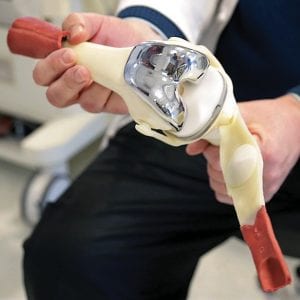 A doctor holds a model of a tri-compartmental total knee replacement. (AP)

People with knees worn out by arthritis will get more pain relief from joint replacement surgery, but it has more risks and there’s a good chance that less drastic approaches also would help. That’s the bottom line from the first study to strictly test other treatments against knee replacement, an operation done hundreds of thousands of times a year in the U.S.

“It’s one of the great operations of the 20th century,” yet good evidence of its effectiveness has been lacking, said Dr. Jeffrey Katz, a joint specialist at Brigham and Women’s Hospital in Boston.

He wrote a commentary in the New England Journal of Medicine, and said the right choice will be different for each patient, depending on goals, overall health, and whether the person wants to have or avoid surgery.

More than 670,000 total knee replacements are performed annually in the United States, mostly for arthritis, which deteriorates cartilage in the joints.

Medical experts advise trying other things before considering surgery, such as weight loss, physical therapy, exercise and medicines, and many studies show these can help. But for how long is not known, nor are there good comparisons of side effects.

Researchers in Denmark assigned 100 patients to either 12 weeks of nonsurgical treatment — physical therapy, exercise, diet advice, special insoles and pain medicine — or surgery followed by 12 weeks of the other treatments.

After one year, the surgery group improved twice as much as the others did on scores for pain, activities of daily living and quality of life. However, two-thirds of those not given surgery still had a meaningful improvement, and only one-fourth of them ended up having surgery within the year.

Complications were more frequent with surgery, including several serious deep vein clots, a fracture and a deep infection. And other studies show that surgery “is not universally successful,” and that 1 in 5 patients still have some pain six months later, Katz wrote.

Others viewed the results as a clear victory for surgery.

“This certainly adds to the evidence that what we’re doing is effective and improves patients’ quality of life,” said Dr. Joshua Jacobs, a joint surgeon at Rush University Medical Center in Chicago and spokesman for the American Academy of Orthopaedic Surgeons.

Many people get relief with therapy but ultimately need surgery when arthritis worsens, he said.

Lynnette Friend, a retired mail carrier from Crown Point, Indiana, tried jointlubricating shots before having a knee replaced five years ago. She plans to have the other one done in January.

“This time I just went ahead and went for the knee replacement,” she said. “There’s not much that can be done when it really starts to deteriorate.”

Kenneth Rose, a retired Chicago police officer, also tried shots before having a knee replaced in 2011. When the other one worsened, he had it replaced in May, and now is able to lose weight and walk a couple miles a day with his wife.

“I wish I had done it sooner,” he said. “It’s such a pleasure, really, you don’t realize how great it is to be able to go outside and take a walk.”

The results give “convincing” evidence that surgery helps, but that there are trade-offs on risks, said Dr. David C. Goodman at the Dartmouth Institute for Health Policy and Clinical Practice.

— Don’t feel pushed or locked into a choice; get more than one opinion, and remember you can always choose surgery later if you try something else first.

— Consider how well you can handle the disruption of activity and rehabilitation needed after surgery, and how much help you’ll have.

— Get a clear estimate of what it will cost you.

The operation runs $20,000 to $25,000 but research also suggests it saves money because it keeps people working and active and helps prevent other health problems.