Study: Side effects emerge after approval for many U.S. drugs 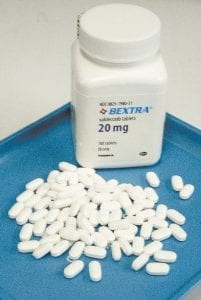 This file photo shows a bottle of Bextra at a drugstore. Almost one-third of new drugs approved by FDA from 2001-2010, ended up years later with warnings about unexpected, sometimes life-threatening side effects or complications, suggested by an analysis published in the Journal of the American Medical Association. The painkiller Bextra was taken off the market in 2005 because of an increased risk of heart problems. (AP Photo)

Almost one-third of new drugs approved by U.S. regulators over a decade ended up years later with warnings about unexpected, sometimes life-threatening side effects or complications, a new analysis found.

The results covered all 222 prescription drugs approved by the U.S. Food and Drug Administration from 2001 through 2010. The researchers looked at potential problems that cropped up during routine monitoring that’s done once a medicine is on the market. The 71 flagged drugs included top-sellers for treating depression, arthritis, infections and blood clots. Safety issues included risks for serious skin reactions, liver damage, cancer and even death.

“The large percentage of problems was a surprise,” and they included side effects not seen during the review process, said Dr. Joseph Ross, the study’s lead author and an associate professor of medicine and public health at Yale University.

While most safety concerns were not serious enough to prompt recalls, the findings raise questions about how thoroughly drugs are tested before approval, said drug safety expert Thomas Moore. But Ross said the results suggest that the FDA “is kind of doing a great job” at scrutinizing drugs after approval.

New drugs are generally tested first in hundreds or even thousands of people for safety and effectiveness.

“We know that safety concerns, new ones, are going to be identified once a drug is used in a wider population. That’s just how it is,” Ross said. “The fact that that’s such a high number means the FDA is working hard to evaluate drugs and once concerns are identified, they’re communicating them.”

The researchers analyzed online FDA data on new drugs and the agency’s later safety announcements. Problems surfaced on average about four years after approval. Results were published in the Journal of the American Medical Association.

The FDA said in a statement that it performs postmarket monitoring “to identify new safety information that may impact product labeling.” The agency said it would review the study findings but declined to comment further.

The study counted blackbox warnings for dozens of drugs; these involved serious problems including deaths or life-threatening conditions linked with the drugs. There were also dozens of alerts for less serious potential harms and three drug withdrawals because of the potential for death or other serious harm.

Among the drugs with added warnings: Humira, used for arthritis and some other illnesses; Abilify, used for depression and other mental illness; and Pradaxa, a blood thinner. The withdrawn drugs and the reason: Bextra, an antiinflammatory medicine, heart problems; Raptiva, a psoriasis drug, rare nervous system illness; and Zelnorm, a bowel illness drug, heart problems.

Safety issues were most common for psychiatric drugs and biologic drugs — made from living cells rather than chemicals — than for older drug types. Drugs brought to market through “accelerated” approval were slightly more likely to have later safety issues than those approved through conventional channels, a link seen in some previous research.

In recent years, there has been increasing pressure on the FDA from consumers and others to speed up its regulatory review process to get new drugs to the market sooner, Ross said.

Moore, a senior scientist for drug safety and policy at the Institute for Safe Medication Practices, said the new results raise concerns about whether new drugs are being extensively tested before approval. He noted that since 2011, drugs have increasingly been approved based on studies in small numbers of patients amid public criticism questioning whether the FDA is keeping potential cures away from patients.

“The answer is, you can’t know whether they’re valuable and lifesaving treatments unless you test them” adequately, Moore said.