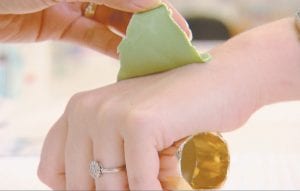 This photo provided by the Annals of Internal Medicine shows a demonstration of how a silicon cast is applied to the back of the hand so researchers can measure fine lines in the skin. The new study, from Australia’s Sunshine Coast, used a unique step to measure whether sunscreens really help that constant onslaught. Researchers compared fine lines on the hands of hundreds of people who, for more than four years, had been assigned to rub on sunscreen daily or only when they deemed it necessary. (AP Photos)

If worry about skin cancer doesn’t make you slather on sunscreen, maybe vanity will: New research provides some of the strongest evidence to date that near-daily sunscreen use can slow the aging of your skin.

Ultraviolet rays that spur wrinkles and other signs of aging can quietly build up damage pretty much anytime you’re in the sun — a lunchtime stroll, school recess, walking the dog — and they even penetrate car windows.

Researchers in sunny Australia used a unique study to measure whether sunscreens really help amid that onslaught. Participants had casts made of the top of their hands to measure fine lines and wrinkles that signal sun-caused aging.

The research found that even if you’re already middle aged, it’s not too late to start rubbing some sunscreen on — and not just at the beach or pool. The study of 900 people under 55 compared those randomly assigned to use sunscreen daily to those who used it when they deemed it necessary. 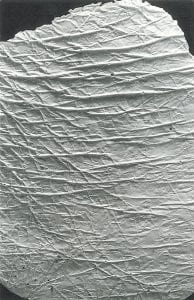 This photo provided by the Queensland Institute of Medical Research is of a skin cast showing a high level of sun-caused skin aging.

Both young adults and the middle-aged experienced skin-saving effects, concluded the study, financed by Australia’s government and published in the journal Annals of Internal Medicine.

“These are meaningful cosmetic benefits,” lead scientist Dr. Adele Green of the Queensland Institute of Medical Research said in an email interview. More importantly, she added, less sun-caused aging decreases the risk of skin cancer in the long term.

Dermatologists have long urged year-round sunscreen use — especially for constantly exposed skin on the face, hands and women’s neck and upper chest — but say too few people heed that advice. Women may have better luck, as increasingly the cosmetics industry has added sunscreen to makeup and moisturizers. Skin experts hope the new study draws attention to the issue. 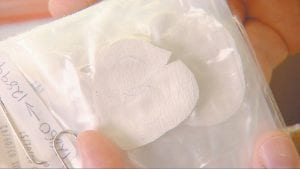 This photo shows some of the hand casts that scientists at Australia’s Queensland Institute of Medical Research used to measure sun-caused aging of the skin.

“Regular use of sunscreen had an unquestionable protective effect,” said Dr. Richard Glogau, a clinical professor of dermatology at the University of California, San Francisco, who has long studied sun’s skin effects. He wasn’t involved with the Australian research.

The consumer message: “They can get a two-for-one with sunscreen. They can do something that will keep them healthier and also keep them better-looking,” Glogau said.

In his clinic near Philadelphia, Dr. Eric Bernstein lectures patients who insist they’re not in the sunshine enough for it to be causing their wrinkles, brown spots and dilated blood vessels. Even 15 minutes every day adds up over many years, he tells them — and if they’re using one bottle of sunscreen a year, they’re probably not using enough.

The news comes just as tougher Food and Drug Administration rules for U.S. sunscreens are taking effect. For the first time, they ensure that sunscreens labeled “broad-spectrum” protect against both the ultraviolet-B rays that cause sunburn and those deeperpenetrating ultraviolet-A rays that are linked to premature wrinkles and skin cancers.

Sunburns, especially in childhood, have been linked to a greater risk for melanoma, the deadliest skin cancer. But overall UV exposure plays a role both in melanoma and in other skin cancers that usually are curable but can be disfiguring if not caught early.

Australia has one of the world’s highest rates of skin cancer, and last week’s aging research actually stems from a larger cancer-prevention study done in the 1990s. Researchers tracked participants for a decade before concluding that regular sunscreen use indeed lowered their cancer risk.

—using those casts that had been made of some participants’ hands.

Skin stretches and recoils thanks to elastic fibers supporting it. UV rays damage that elasticity, something scientists previously have measured using biopsies of the tissue just under the skin’s top layer. With enough damage, the skin on top starts to sag and wrinkle. Young people have very fine, barely visible lines on their skin. Sun-damaged fi- bers correlate with increasingly visible lines, in a sort of cross-hatch pattern. Hand casts allowed the Australian researchers to grade that amount of damage.

The researchers figured out who really used sunscreen by periodically weighing the bottles donated by a sunscreen maker. Green’s team calculated that three-quarters of the people assigned to daily sunscreen use actually applied it at least three to four days a week. Only a third of the comparison group said they used sunscreen that often.