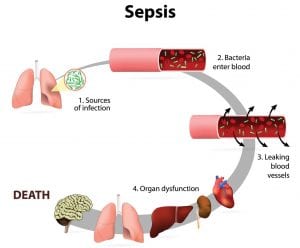 Minutes matter when it comes to treating sepsis, the killer condition that most Americans probably have never heard of, and new research shows it’s time they learn.

Sepsis is the body’s outof control reaction to an infection. By the time patients realize they’re in trouble, their organs could be shutting down.

New York became the first state to require that hospitals follow aggressive steps when they suspect sepsis is brewing. Researchers examined patients treated there in the past two years and reported Sunday that faster care really is better.

Every additional hour it takes to give antibiotics and perform other key steps increases the odds of death by 4 percent, according to the study reported at an American Thoracic Society meeting and in the New England Journal of Medicine.

That’s not just news for doctors or for other states considering similar rules. Patients also have to reach the hospital in time.

“Know when to ask for help,” said Dr. Christopher Seymour, a critical care specialist at the University of Pittsburgh School of Medicine who led the study. “If they’re not aware of sepsis or know they need help, we can’t save lives.”

The U.S. Centers for Disease Control and Prevention last year began a major campaign to teach people that while sepsis starts with vague symptoms, it’s a medical emergency.

To make sure the doctor doesn’t overlook the possibility, “Ask, ‘Could this be sepsis?’” advised the CDC’s Dr. Lauren Epstein.

Once misleadingly called blood poisoning or a bloodstream infection, sepsis occurs when the body goes into overdrive while fighting an infection, injuring its own tissue. The cascade of inflammation and other damage can lead to shock, amputations, organ failure or death.

It strikes more than 1.5 million people in the United States a year and kills more than 250,000.

Even a minor infection can be the trigger. A recent CDC study found nearly 80 percent of sepsis cases began outside of the hospital, not in patients already hospitalized because they were super-sick or recovering from surgery.

If you think you have an infection that’s getting worse, seek care immediately, Epstein said.

Doctors have long known that rapidly treating sepsis is important. But there’s been debate over how fast. New York mandated in 2013 that hospitals follow “protocols,” or checklists, of certain steps within three hours, including performing a blood test for infection, checking blood levels of a sepsis marker called lactate, and beginning antibiotics.

Do the steps make a difference? Seymour’s team examined records of nearly 50,000 patients treated at New York hospitals over two years. About 8 in 10 hospitals met the three-hour deadline; some got them done in about an hour. Having those three main steps performed faster was better — a finding that families could use in asking what care a loved one is receiving for suspected sepsis.

Sepsis is most common among people 65 and older, babies, and people with chronic health problems.

But even healthy people can get sepsis, even from minor infections. New York’s rules, known as “Rory’s Regulations,” were enacted after the death of a healthy 12-year-old, Rory Staunton, whose sepsis stemmed from an infected scrape and was initially dismissed by one hospital as a virus.

Illinois last year enacted a similar sepsis mandate. Hospitals in other states, including Ohio and Wisconsin, have formed sepsis care collaborations. Nationally, hospitals are supposed to report to Medicare certain sepsis care steps. In New York, Rory’s parents set up a foundation to push for standard sepsis care in all states.

“Every family or loved one who goes into a hospital, no matter what state, needs to know it’s not the luck of the draw” whether they’ll receive evidencebased care, said Rory’s father, Ciaran Staunton.