Study: Up to 1 in 5 trauma deaths could be prevented 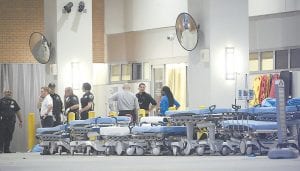 Emergency personnel waited with stretchers at the emergency entrance to Orlando Regional Medical Center hospital for the arrival of patients from the scene of a fatal shooting at Pulse Orlando nightclub. Up to 1 in 5 deaths from car crashes, gunshots or other injuries might be prevented with better, quicker trauma care that doesn’t depend so much on where you live, according to government advisers. (AP Photo)

Up to 1 in 5 people may be dying unnecessarily from car crashes, gunshots or other injuries, a stark conclusion from government advisers who say where you live shouldn’t determine if you survive. The findings take on new urgency amid the increasing threat of mass casualties like the massacre in Orlando.

The Orlando shooting happened just blocks from a major trauma care hospital, an accident of geography that undoubtedly saved lives. But a new call to action has found that swaths of the country don’t have fast access to top care, and it urges establishing a national system that puts the military’s battlefield expertise to work at home.

The ultimate goal: Zero preventable deaths after injury, and minimizing disability among survivors, said the National Academies of Sciences, Engineering and Medicine report.

Because no one organization is in charge of trauma care in America, the highranking advisers called on the White House to lead the effort, but they also said local and state improvements could begin immediately. 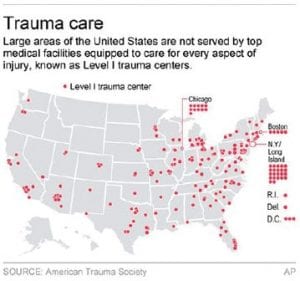 “The meter is running on these preventable deaths,” said Dr. Donald Berwick of the Institute for Healthcare Improvement, who chaired the NAS committee.

Trauma is the leading cause of death for Americans 45 and younger, killing nearly 148,000 people in 2014 alone and costing an estimated $670 billion in medical expenses and lost productivity.

The report found a patchwork of results, from emergency medical systems — the often-volunteer first responders — that are considered more as transporters than health providers, to death rates that vary twofold between the best- and worst-performing trauma centers.

Yet the biggest opportunity to save lives occurs well before reaching a doctor. About half of deaths occur at the scene of the injury or en route to the hospital.

“The answer’s always been to drive faster or fly faster. We’re almost at the limit of that. Minutes really do count in these critically ill patients. But we can do things to stop bleeding, resuscitate better, while we’re flying or driving faster,” said panelist Dr. John Holcomb, a trauma surgeon and retired Army colonel now at the University of Texas Health Science Center in Houston.

Where the military comes in: The percentage of wounded service members who died of their injuries in Afghanistan decreased by nearly half between 2005 and 2013, the report found. The improvement resulted from systematic study of battlefield deaths that led to new policies — such as equipping soldiers with tourniquets so the wounded didn’t have to hope a medic was nearby in time to stop catastrophic bleeding.

Military findings suggest about 20 percent of deaths could be prevented with optimal care, Holcomb said. That translates into “81 patients a day dying in the United States — every day — that are potentially preventable,” he said.

The military still needs improvement, too, the panel said: Nearly 1,000 battlefield deaths between 2001 and 2011 were from potentially survivable injuries. One worry is that hard-won lessons will be lost, leading the panel to recommend that military surgeons keep their skills sharp by doing some work in civilian trauma centers between combat tours.

Whether in combat or civilian life, hemorrhage is the leading cause of preventable trauma death. Panelist James Robinson, assistant chief at the Denver Health EMS, said that’s one reason bystanders begin “the chain of survival.”

“The shadow of Orlando is on everything we’re doing today. Everything we’re learning about injuries in the battlefield has a lot to do with our preparedness and ability to respond to mass casualties,” he said. The shooting at the Pulse nightclub last weekend left 49 victims and the gunman dead.

Creation of an expert workforce is key, said panelist and trauma surgeon Dr. C. William Schwab of the University of Pennsylvania — from first responders to trauma centers to the rehabilitation care that survivors receive.

And the panel called for more research in the poorly studied field to determine practices that save the most lives.

What is known: About two-thirds of Americans have access to a Level I trauma center — like the Orlando Regional Medical Center, the most advanced kind — within an hour by land or air. But only 1 in 4 rural residents are that close, compared with nearly 90 percent of urban dwellers.

In some regions, a third of severely injured patients aren’t transferred to either a Level I or Level II trauma center. The Centers for Dis- ease Control and Prevention has triage guidelines for EMS in deciding what type of care a patient needs, but as of 2011, the latest data, only 16 states had at least partially implemented them, the panel found.

Hospitals that can’t handle severe injuries have to transfer patients, and those patients are nearly 25 percent more likely to die than those taken immediately to a trauma center, the report concluded.

This isn’t a new problem — experts have called for improvements in trauma care for years.

“This time maybe the difference is we’ve just completed a big war. People are very concerned about it. We do have terrorism going on on our own soil. We do have a civilian trauma system that although not perfect is ready to receive some of these lessons-learned,” Holcomb said.