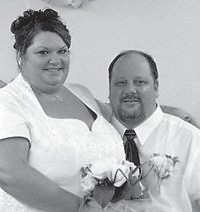 It has been a very busy time here since school started back and we moved, yet again, I believe my plan is to live here three years and work at being in a position to purchase my own home so the kids can feel more secure in their living arrangements. I’ve gotten behind on my news a bit.

I’d like to announce the wedding of Jim Hardesty and Angie Hornback. They are friends of mine who I thought would get along well with each other, and they surprised us all by falling in love rather quickly. They got married August 28.

Jim was a neighbor a few years ago and Angie and I met through a mutual friend.

The kids and I moved to a cute little townhouse with an awesome patio and fenced-in backyard the last weekend in July. There is so much more room because of the layout plan of the building, and the kids headed back to school August 4. So far all of that is going well.

Late happy anniversary to Teddy and Naoma Sturgill, my aunt and uncle at Eolia, and also my dad, Clyde Stidham Jr., and his wife Betty of Pound, Va. Both on August 28.

The Bourbon Festival was in full swing last weekend with lots of music and bands and Rodney Adkins did a free concert. I never got clear details of where that one was. My neighbor Becky and her kids and I walked through the booths Friday night to check it out.

There’s always something fun and “touristy” going on around here anyway.

The street work wasn’t complete but crews suspended the work during the Bourbon Festival as there are so many out-oftown visitors who wouldn’t have fun having to listen to jackhammers and take detours to get where they wanted to go.

That’s all the news for this week. Have a blessed day