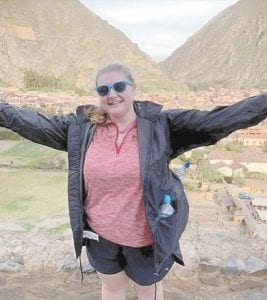 BIRTHDAY — Jessica Nottingham celebrated her 18th birthday on March 1. She is a daughter of Scott and Anna Nottingham, and granddaughter of Rose Ballard.

Hello everyone! How’s everything in your little corner of the world? As I start complaining about the weather, the sensible part of my brain kicks in reminding me that the Ohio Valley area really hasn’t been so bad this winter.

Wednesday evening, Vicki Power, Daphne Korner, and I had plans to go to Madison, Ind. to a preview of the Mountain Minor movie, as special music was being held before the movie. Weather forecasts predicted rain with snow, and my son Keith Ballard kept saying, “Oh, it isn’t going to be that bad.”

For once I listened to my brain and not my heart, as I called Daphne to tell her I changed my mind about going. Wednesday morning. Vickie and I had taken a trip to Western Hills, and on our way home it was snowing quite a bit. That is when I made the decision I wasn’t going to take a chance of being that far away from home with falling temperatures. By the news, I didn’t make a mistake as several had difficulty traveling.

I’m becoming a runabout, as Saturday, Vickie Power and I decided on the spur of a moment to take an adventure to College Hill Coffee Shop as a new group made a first appearance. With two musicians that I enjoy listening to, Marvin Davis and Trina Emig, it was a very enjoyable evening. I love going to music places, seeing people I haven’t seen in a long time. 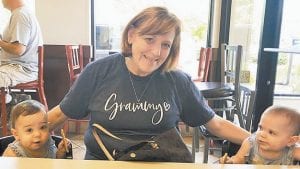 Sunday, this area had a little sneak preview of spring. It was really beautiful, with just a tinge of coolness in the air. Old Time Fiddlers was held Sunday, so I spent most of the day inside. I did take a few minutes to enjoy the beautiful sunshine.

We had a good crowd at our meeting, and the music was so good. I wanted to dance, so I sat in my chair and tapped my left foot. Our meeting was held inside the lounge at the VFW Post as the hall had been rented out two days for a baby shower.

There were so many people, I could hardly find a place to park to unload my things that I need for our meeting. It was people from India, and I think they had half the nation here locally. The only time I’ve seen a crowd that big is for a wedding reception, which is held at night. 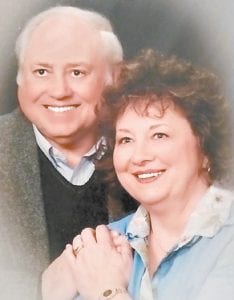 ANNIVERSARY — Katherine Caudill Amburgey and Enos Amburgey, formerly of Premium and Letcher respectively, recently celebrated their 55th wedding anniversary at Cumberland Falls State Resort Park. The couple wed on February 22, 1965 in Clintwood, Va., and moved near North Vernon, Ind. not long after their marriage. They have two children, Enos Jr. of North Vernon, Ind., and Rebecca Amburgey Ude of Carmel, Ind., two grandchildren and three great-grandchildren, all of whom live close by and love spending time together.

There’s something I can never understand. When people go to events, no matter what they are, why do people leave their trash behind? Yes I know that people are paid to clean up. Years ago my ex-husband got upset with me as I picked up our cups when we started to leave. He asked what I was doing that for as that’s what they paid people for.

I replied yes I know, and if you remember I am one of those people who cleans for a living. That doesn’t mean that I have to leave it for someone else to pick up after me.

In my own home I am a clutterbug, and to be honest I am a hoarder as I have things that need to be thrown away. It is my house. However when I clean, I do a good job. When I leave a motel room, it is not a mess for the cleaning person to clean.

This morning as I was doing laundry, my son Keith Ballard brought his work coat to me, asking if I could get out some oil stains, as it is a new coat. I started laughing, as it is a work coat. I did tell him that it made me proud that he cares enough about his clothes to want to take care of them.

My oldest daughter Kay Gray will almost chase someone out the door with an iron in her hand before she would let them leave with wrinkled clothes. Both take a little after me on both accounts, as I don’t have expensive clothes, but I do try to make sure I take care of things I wear. As far as ironing, I am the reason Kay is so particular is that everything my husband the kids wore was always ironed. I used to iron sheets and pillowcases. Wish I had the energy to be that way now.

Johnny and Ann Calihan have finally received some good news, as their daughter Sue Wagner had a liver transplant a week ago Friday. Sue was on the transplant list two years, and her health had really begin to deteriorate as Sue has other health issues. After the surgery Sue was doing great, but she started losing blood, so the surgeons had to operate again. They fixed the issue, now Sue is out of ICU and she is in a room and doing great.

From what I hear she has the best doctors, however I am a firm believer that God is the greatest healer of all.

Johnny and Ann sure needed a break. Please keep this special family in your prayers.

Belated happy birthday to my granddaughter, Jessica Nottingham, who celebrated her 18th birthday on March 1.

I sure wasn’t a very good grandmother. I awoke Sunday morning with stomach issues, and I had to literally force myself to get everything done for my meeting. I meant to call Jessie to wish her happy birthday, but I had a few unpleasant things happen during the day.

Then when everything was finished, my sugar dropped, and by the time I got home I was exhausted and fell asleep. It was in the wee hours when I awoke, realizing what I had done.

Jessie graduates from high school this year. I don’t think she has chosen a college yet, but I do know she has received partial scholarship from eight colleges.

Sarah Nottingham graduates from college, I keep forgetting what career she has chosen.

As I’ve written so many times before education has always been so important to me, simply because of the lack of education in my life. I am thankful that what I don’t have in education, God simply gave me guts to achieve the things that I have done.

I am not proud of some things I did when I was young, I am very proud of the person I am today. Even more proud, I’ve accomplished so much by myself, without asking for help or depending on some man to do for me.

I wanted to go back to school when my children started school, but it caused so much aggravation between my husband and me, that I gave up the idea. Jack told me that I would never have to work, so why did I want to go back to school, and a lot more.

After we divorced he was very wrong. For several years I had to work day and night to manage pay for the house, car, and other bills.

After his death his words came true. I don’t have to work, and have no one to tell me how to live my life.

If only an idiot driver hadn’t caused me to hit her, I had life by the tail and was enjoying life to the fullest. I am thankful that I have recovered as much as I have.

Carcassonne Community Square Dance will resume March 14 from 6 to 9 p.m. Sunrise Ridge is the featured band. Randy Wilson is the caller. A meal will be served so come hungry. This is sponsored by Community Trust Bank. For information, get in touch with Mike or Marcia Caudill or check out Carcassonne Community activities on the computer

Campbell’s Branch Community Center has music each Friday night with Kentucky Friends of Bluegrass the second Friday of each month. Food is served so go hungry.

Hello to Les and Pat Wagner and all the Wagner family.

Warren and Judy Waldron, who are musicians also whom I have known for several years, were at a music event. Judy somehow got talking to another musician who is from Whitesburg, Brent or Brett Ratliff, I am sorry I can’t remember for sure about the first name. He is a DJ at WMMT radio station.

When Warren and Judy are traveling, they somehow come through or close to Whitesburg. Judy was asking me about Cowan Music, how far was it from Whitesburg, as she was pulling things up on her cell phone. I laughed and replied, “Judy I can take you, but please don’t ask me the directions.”

As we talked she pulled up Carcassonne Community Center, she said, “Oh my goodness it goes, up and up a mountain and is situated at the very top.”

Daphne Korner joined in the conversation at this time. Daphne said, “Yes, Judy, and you have to come down, down, down that mountain too.”

Now this caused everyone to have a good laugh.

Daphne was kind enough to drive me to the mountains when I was in a wheelchair, wearing a boot on my right foot and a brace on my left wrist.

Hello to Buddy and Bernice Grubb. I hope you are doing alright. They remodeled their house, and Bernice was teasing as she named a bedroom Rose’s room. Now how special can I feel?

My daughter Kay and her husband Clarence Gray spent a few days in their mansion of a home in Destin, Fla. I think they are thinking of selling it.

Well, it is time for me to drag this worn out body to get showered and start my day.