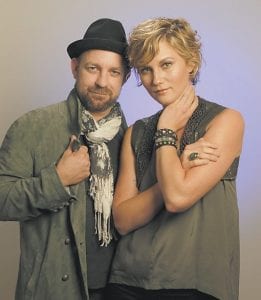 Living on the edge is right where you’ll find country duo Sugarland.

They are continuing to stretch genre boundaries on their fourth album, “The Incredible Machine,” and consider it a “thank you note” to fans for allowing them to grow as artists over the years.

Sugarland’s other half, guitarist Kristian Bush, 40, said fans not only have encouraged the duo but rewarded them for taking risks, like with their 2008 hit, “Stay.” The nearly five-minute acoustic song went to No. 2 on the country charts and won them a Grammy.

They’re doing it again with “The Incredible Machine’s” leadoff single, “Stuck Like Glue.” It’s a top five hit on Billboard’s country music chart, despite getting initial push back from some country radio programmers who took issue with the song’s reggae-infused section.

“Can you imagine that? We just do some beat-boxing, and we get in trouble,” added Bush with a chuckle.

The two of them drew inspiration from their teenage years in the 1980s for the album, released last week. Nettles said that brought an element of sheer joy to the creative process.

Artists like Blondie, Peter Gabriel, Simple Minds and movies such as “Say Anything,” ‘’The Breakfast Club” and “Pretty in Pink” all played a role in shaping the young lives of Nettles and Bush.

“It’s what defines you at that age, the movies you see and the music you were listening to as you really started to choose things for yourself,” said Bush. “So it has an indelible mark on you as a musician. That’s when we were also learning to be musicians.”

The duo relied on those influences, using Blondie-esque synthesizer sounds on songs like “All We Are” and “Find the Beat Again and writing “Tonight” with “Say Anything’s” stereo serenade scene in mind.

Byron Gallimore, the producer who has worked with Tim Mc- Graw, Faith Hill and Phil Vassar among others, has produced Sugarland’s last three studio albums and their Christmas release. He said of the duo: “It really doesn’t get any better than what they’re doing. They’re right at the top. ” Gallimore called Bush “a phenomenal guitar player” and praised Nettles for being “one of the fastest vocalists” he has ever worked with.

“She’s totally capable of singing any song one time and that being the record. I’ve seen her do it. She’ll do about three vocal takes, and we’ll pick one,” he said. “(Bush’s) acoustic tracks are the same way. We’ll play them through one time and that’s it.”

That talent shines through anytime they perform live, and their audience continues to broaden. They just wrapped the first leg of their 55-city “Incredible Machine” tour and performed a special “Unstaged from American Express” live-stream concert in New York directed by “This Is It” filmmaker Kenny Ortega. They will also take part in this year’s “VH1 Divas” show honoring the military.

Nettles said they are excited to show people “that country music is hip and young and fun and accessible,” adding, “It’s not necessarily about lifestyle, it’s about having fun and being human.”

When asked what makes them work as a duo, both say it comes down to one thing.

“Our friendship and our creative relationship (are) based off of respect without a doubt,” said Nettles. “We each bring different strengths to the table.”

Bush agreed: “Any relationship that you have with anyone, it has to be based on respect first. From there, everything else kind of blossoms.”