Sugarplums are easily, but rarely made 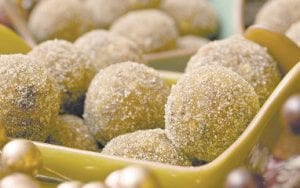 Sugarplums are shown in this photo. (AP Photo/Larry Crowe)

Sugarplums may dance in your dreams, but chances are you couldn’t identify one if it hit you on the head.

As holiday sweets go, sugarplums simply haven’t been fashionable for an awful long time. That’s too bad, as they are an attractive, fuss-free and tasty sweet that’s child-friendly and involves no cooking.

And despite the name, plums aren’t necessarily involved. While there are numerous recipes and variations, sugarplums generally are balls of chopped dried fruit and nuts mixed with a bit of liqueur and rolled in sugar.

There’s plenty of room for improvisation. While apricots, raisins and dates are common ingredients, any mix of dried fruits (including plums) works well. The key is making sure the fruit is evenly chopped. A food processor works best.

Plain granulated sugar is the traditional coating, but you also could use finely chopped nuts or coconut.

If you opt for coconut, consider going with a tropical theme, using dried pineapple, mango, dates and cashews for the fruit and nut mixture. You also could use rum instead of the orange liqueur.

If you’d rather not use liqueur, substitute an equal amount of apricot jam or orange juice. And for a more rustic look, use turbinado sugar (which is light brown) instead of white granulated.

In a wide, shallow bowl, combine the sugar, cardamom and cinnamon. Mix well, then set aside.

In a food processor, pulse the pecans until roughly chopped. Add the pistachios and pulse again until both nuts are finely chopped. Transfer the nuts to a bowl and set aside.

In the food processor, combine the dates, apricots and figs. Pulse briefly until roughly chopped. Add the raisins and cherries, then continue pulsing until the fruit is evenly chopped and begins to clump.

Return the nuts to the processor and add the rum or liqueur. Pulse until just mixed. If the mixture does not stick together, add additional rum or liqueur.

A teaspoon at a time, roll the mixture into balls, then roll each ball in the sugar until well coated.

Sugarplums can be refrigerated in a sealed container for up to 1 month. If you layer the sugarplums, place a sheet of waxed paper between each layer.