By TONY BLAIR
and KENNETH BLAIR 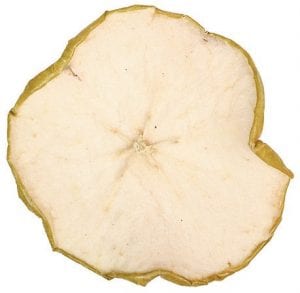 Sliced apples were available all winter long after being properly ‘sulfured’ and put away for storage.

Pioneer life in Letcher County and elsewhere was hard.

If the pioneer family did not make it or raise it, they did without it. Their garden had to be large enough to provide not only fresh produce during the gardening season, but enough extra food to last until the next summer’s garden came in. The wise pioneers kept enough preserved food on hand to tide them over another year or two just in case of a crop failure or some other emergency reduced the amount of food preserved one season.

Common ways of preserving garden produce were drying, canning, pickling, and storing fresh produce in a hole or cellar. Meat could be jerked or canned, but by far the most common method used by our ancestors to preserve meat was salt curing. Hogs were killed in the late fall, after the daily temperature dropped low enough to allow the salt to dry the meat before the meat spoiled. Many families traditionally had fresh pork for their Thanksgiving meal.

I’ve heard of storing large amounts of freshly fried meat in a lard stand. A layer of lard was placed in the bottom of the stand, then a layer of fried meat, another layer of lard, another layer of meat, and so on, until the top layer was lard. The lard packed firmly around the meat kept the meat from spoiling by preventing the meat from being in contact with air. If such a method of preserving meat actually existed, there may be more to this process. (If anyone reading this knows the details of this method, please send detailed instructions to The Mountain Eagle so that this process will not become forever lost.) 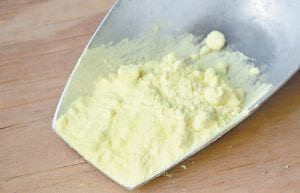 Dry sulfur powder was used by our ancestors to preserve apples.

In earlier times, the only source for apples were the neighborhood orchards that provided ripe apples from midsummer until late fall. Pioneers preserved these apples by drying, canning, and making applesauce and apple butter. Certain late ripening varieties that kept well were stored through the winter. The story goes that early one spring in the early 1800’s, long before modern refrigeration, an enterprising young man in Pennsylvania noticed children searching for apples in the leaves beneath a native apple tree and eating their find as they walked home from school. This young man wondered, “Hmm, could I start an orchard of these apples and sell them?” That’s the reason one can now buy the long-keeping and tasty York apples at fruit markets.

Another apple preserving method, which has virtually disappeared, is “sulfuring.” I have known of only two people sulfuring apples. My cousin Benton Back sulfured apples late into his lifetime, and my brother Kenneth Blair still sulfurs them although he has said that this year will be his last because of the inconvenience of obtaining the sulfur.

A couple of years ago, I mentioned to my brother that I did not know how to sulfur apples and that I had never even seen or tasted the final product. That conversation and his follow-up demonstration resulted in the following description of the apple sulfuring process.

There are various ways to sulfur apples, but all the variations involve trapping smoke from burning sulfur inside a container holding the apples.

Kenneth explained the process that our mother, Vina Hampton Blair, used. She half-filled a large crock with sliced apples. She then placed about 1/2 cup of dry sulfur powder in a bowl on top of the apples. Since a match would not set the sulfur on fire, she dropped a hot coal from the heating stove or fireplace onto the sulfur. Since the sulfur immediately caught fire and burned only briefly, it was necessary for the crock to be covered as quickly as possible. To speed the covering, she had a second person ready to spread a cloth over the crock and tie a string around the crock to hold the cloth snuggly in place.

Kenneth has developed his own variation of sulfuring apples. He made a basket out of screen wire large enough to hold about two gallons of apples and small enough to go in fivegallon plastic bucket. He slices his apples into about eight pieces (peeling is optional) and fills his basket. He places this basket of apples in the bucket that has supports inside to hold the basket near the top of the bucket. He then covers the bucket with a cloth and ties the cloth tightly in place with a string.

He had previously cut with a sabre saw an L-shaped opening in the lower side and bottom of the bucket. Since the vertical part of the “L” came from the side of the bucket and the horizontal part of the “L” was cut from the bottom, the cutout will stand erect. He places a tuna can containing about 1/3rd of a cup of sulfur powder through this opening into the bottom of the bucket beneath the basket of apples. He heats a bolt with a blow torch until the bolt is red hot. Using tongs or wire pliers, he places the hot bolt on the sulfur and quickly closes the opening using the L-shaped cut-out. Only the sulfur near the hot bolt will burn.

He has another tuna can fastened near the bottom of the apple basket to be a barrier to prevent the flames of the burning sulfur from scorching the apples. After the apples have smoked for an hour or two, he removes the apples from the basket and stores them in jars. Sometimes, if the apples are not slightly wilted, it is necessary to repeat the smoking process. It is not necessary to store the apples in an airtight container.

Tony Blair is a retired school teacher living at Jeremiah. His observations for this report were based on a conversation with his brother, Kenneth Blair, a Letcher County native and retired educator living in Lexington.