By KIMBERLY REYES The Associated Press 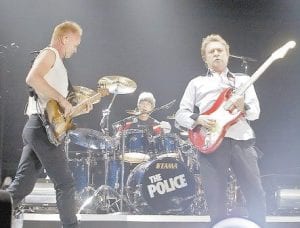 As flip-flops hit the pavement and barbecue grills ignite, some of the biggest artists are packing their bags to get the summer concert season started.

This year, everyone from Justin Timberlake, Kelly Clarkson, The Fray, Bob Dylan and Roger Waters are hitting the road. “Business seems to be as healthy as ever in 2007,” said Gary Bongiovanni, editor in chief of the concert trade publication Pollstar.

There are no huge blockbuster U.S. tours like The Rolling Stones or Barbara Streisand, the top-grossing tours of 2006 with $138.5 million and $92.5 million, respectively. But rock veterans will still lead the way this summer, persuading hordes of people to pay hundreds of dollars per ticket.

Reunited acts like Genesis and the Police seem to be in the highest demand, with concerts selling out in pre-sales. “The older acts really fuel ticket sales,” says Bongiovanni, “That audience is loyal and has more disposable income.”

Destination music festivals are another summer rite of passage, and Bonnaroo (June 14-17 in Manchester, Tenn.) might be the most coveted ticket: It boasts acts like The Police, The White Stripes, Ben Harper & The Innocent Criminals, Wilco, Flaming Lips, Franz Ferdinand, Damien Rice, Ziggy Marley, The Roots and Kings of Leon.

Another top draw this summer is Lollapalooza, to be held August 3-5 in Chicago’s Grant Park, with Pearl Jam, Daft Punk, Interpol, My Morning Jacket, Yeah Yeah Yeahs and Lupe Fiasco.

“Although rap sells a lot of records, it still doesn’t translate into a good live draw,” Bongiovanni explains. “History has repeatedly proven that the public is not clamoring to see rap and R&B performed live, so very few tours even attempt to go out.”

Luckily, there are a number of worthwhile artists who do venture out. Here’s our list of 10 “must-see” concerts this summer:

1. The Police: Catch the original lineup performing the classics while you can, because no amount of money can keep these huge egos together for long. ($50-$250)

2. Beyonce: Get ready for some serious booty shaking from the reigning R&B diva and her hand-picked, all-girl band. ($47- $125)

3. Smashing Pumpkins: Billy Corgan and Jimmy Chamberlin play so nice together – but that only describes their music. Hostility always makes for an entertaining set. ($20-$25)

4. Justin Timberlake: While Michael Jackson is holed up in Vegas and Usher works on his new album, JT is the best option for smooth choreography and well-produced live R&B. ($54- $155)

5. Genesis: OK, so it’s somewhat cruel that Peter Gabriel happens to be on a separate yet concurrent world tour schedule as Phil Collins and the boys. Maybe that means there’s a possibility of an on-stage surprise down the road. ($57-$260)

6. Soul2Soul 2007 (Faith Hill and Tim McGraw): The Brangelina of country music have extended their wildly successful Soul2Soul II Tour into 2007, just to be fair to everyone who didn’t see the sparks fly onstage the first time around. ($49-$97)

7. The White Stripes: This Detroit duo’s latest album uses elements of Scottish folk, blues and glam-rock, delivering some of the most inspired guitar-rock around. And yeah, it’s definitely better live. ($40-$50)

9. Gwen Stefani: Admit it, you own the CDs or at very least sing along to her sugary, ’80sinspired tunes custom made for summer. So drop the pretense, kick back, and enjoy the show. ($25-$70)