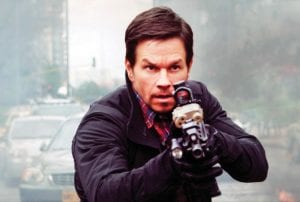 Actor Mark Wahlberg in a scene from “Mile 22,” in theaters on August 3. (STXfilms via AP)

Here’s what’s playing this summer at the movies. Dates are subject to change.

“The Week Of ” (on Netflix April 27) — Adam Sandler is the middle class father of the bride and Chris Rock the wealthy father of the groom in this wedding comedy.

“Overboard” (May 4) — The classic Goldie Hawn and Kurt Russell comedy gets a reboot, and a gender swap, with Anna Faris in the Russell role opposite Eugenio Derbez.

“Tully” (May 4) — The “Juno” team (Jason Reitman and Diablo Cody) are behind this film about a mother of three (Charlize Theron) and her night nanny (Mackenzie Davis). 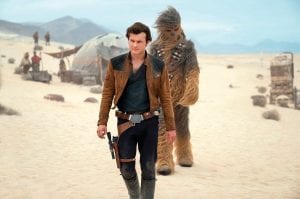 Alden Ehrenreich and Joonas Suotamo appear in a scene from “Solo: A Star Wars Story,” in theaters on May 25. (Jonathan Olley/Lucasfilm via AP)

“Breaking In” (May 11) —Gabrielle Union has to defend her family from home invaders.

“Life of the Party” (May 11) — A newly single housewife (Melissa McCarthy) goes back to college, with her daughter, to try to reclaim her life.

“The Seagull” (May 11) —Saoirse Ronan and Annette Bening star in an adaptation of the classic Anton Chekov play.

“Deadpool 2” (May 18) —Ryan Reynolds returns as the hilariously irreverent Marvel character, who’s got a new foe in Cable (Josh Brolin).

“Show Dogs” (May 18) — Will Arnett teams up with some crime fighting dogs.

“On Chesil Beach” (May 18) — Saoirse Ronan stars in an adaptation of the Ian McEwan romance set in 1962.

“First Reformed” (May 18) — “Taxi Driver” scribe Paul Schrader directs this tension-filled drama about a grieving pastor (Ethan Hawke) and a woman (Amanda Seyfried) at his church.

“Solo: A Star Wars Story” (May 25) — The origins of Star Wars’ favorite scruffy-looking scoundrel Han Solo (Alden Ehrenreich) are explored, including how he met Lando (Donald Glover) and Chewbacca.

“Adrift” ( June 1) — Based on a true story, a young couple (Shailene Woodley and Sam Claflin) on a deep sea sailing adventure attempt to survive a catastrophic hurricane and its aftermath.

“A Kid Like Jake” (June 1) — Parents Claire Danes and Jim Parsons grapple with the apparent gender nonconformity of their four-year-old son.

“Won’t You Be My Neighbor” (June 8) — Put on your comfy sneakers and cardigan for this documentary about Mister Fred Rogers, from Academy Awardwinner Morgan Neville.

“The Incredibles 2” (June 15) — Get your super suit ready, the Incredibles are back, and Mr. Incredible has to stay with the kids (and baby Jack-Jack) while Elastigirl is out saving the world.

“Set It Up” (on Netflix June 15) — Young assistants try to make their lives better by setting up their cruel bosses. With Lucy Liu and Taye Diggs.

“Jurassic World: Fallen Kingdom” (June 22) — Owen (Chris Pratt) and Clare (Bryce Dallas Howard) travel back to Isla Nublar to save the remaining dinosaurs from a volcano.

“Under the Silver Lake” (June 22) — A kooky Los Angeles-set odyssey from the director of “It Follows” about a guy (Andrew Garfield) searching for a disappeared girl (Riley Keough).

“Sicario: Day of the Soldado” (June 29) — Josh Brolin and Benicio Del Toro take on drug cartels responsible for smuggling terrorists across the border in this sequel.

“Uncle Drew” (June 29) — “Get Out” scene-stealer Lil Rel Howery stars in this comedy about a Harlem basketball tournament.

“The Hustle” (June 29) — A remake of “Dirty Rotten Scoundrels” with Anne Hathaway and Rebel Wilson.

“Ant-Man and the Wasp” (July 6) — Paul Rudd is back as the shrinking superhero, now with a possible partner in Evangeline Lilly’s The Wasp.

“Sorry to Bother You” (July 6) — A Sundance breakout, this Oakland-set sci-fi comedy stars Lakeith Stanfield as a telemarketer opposite Tessa Thompson and Armie Hammer.

“Whitney” (July 6) —A documentary from Kevin Macdonald that explores the life of Whitney Houston with the support of her estate.

“Skyscraper” (July 13) — Framed and on the run, Dwayne Johnson has to save his wife and kids from the world’s tallest building which also happens to be on fire.

“Mamma Mia: Here We Go Again!” (July 20) — Pack your bags to spend another ABBA-filled summer in the Greek isles with a pregnant Sophie (Amanda Seyfried) who learns about her mom Donna’s youth. With Meryl Streep, Cher and Lily James.

“Blindspotting” (July 20) — A police shooting tests a friendship in this Oaklandset drama.

“ The Darkest Minds” (August 3) —When teenagers get superpowers, the government turns against them in this sci-fi actioner based on the Alexandra Bracken novel. With Amandla Stenberg and Mandy Moore.

“Mile 22” (August 3) — Mark Walhberg re-teams with director Peter Berg for this actioner about an American intelligence officer and the police officer he has to protect.

“The Spy Who Dumped Me” (August 3) — Two friends (Mila Kunis and Kate McKinnon) get entangled in a high-stakes international conspiracy in this comedy.

“The Wife” (August 3) — Glenn Close and Jonathan Pryce star in a marital drama based on Meg Wolitzer’s book.

“The Happytime Murders” (August 17) — In a world where puppets and humans co-exist, two oddcouple cops (one human, one puppet) band together to solve a crime. With Melissa McCarthy, Maya Rudolph and Joel McHale.

“Crazy Rich Asians” (August 17) — An American woman (Constance Wu) gets transported into a world of excess when she flies to Singapore to meet her boyfriend’s family in this adaptation of Kevin Kwan’s popular book.

“Slender Man” ( August 24) — The terrifying boogeyman with the featureless face is coming to haunt theaters.