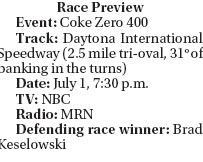 The Monster Energy NASCAR Cup Series returns to Daytona International Speedway this weekend for the running of the Coke Zero 400. Even though the race is not the midpoint on the schedule, it is the unofficial halfway point of the season and the beginning of a 10-race stretch that will determine the 16-driver field that will move into the championship round of the schedule with the opportunity to become this season’s champion.

The Coke Zero 400 will be the third of four restrictor plates this season and, because of the use of the horsepower-reducing device, it is a race where the field is so even that any driver could end up in victory lane. It’s also a race where the “big one” is a common occurrence that could cost a driver the points that he may need later to make it into the championship round.

When NASCAR announced before the season began that the races would now be contested in stages with bonus points available for the top-10 finishers at the conclusion of the first two stages, most drivers were still thinking that the easiest way into the championship round was with a win. Now, the stage bonus points plus the one bonus point earned by the winner of each stage that carries over to the championship round have proven to be all of the motivation needed to amp up the competition early in a race as every driver knows the importance of a stage win.

The stage points have become even more valuable as the season has progressed because of some unexpected drivers that have already punched their ticket into the championship round because of making a trip to victory lane. Ryan Newman and Austin Dillion both drive for Richard Childress Racing and both have been unexpected winners this season. Joining them in the 16-driver championship round are first-time winners Ryan Blaney and Ricky Stenhouse Jr. Together these four drivers make up a quarter of the championship field and in the process some drivers who normally make it in are now finding themselves having to collect every point they can each weekend as the number of races left to claim their spot by posting a win continues to dwindle.

Racing to collect points at one time was the norm in the series, but the “win and you are in” rules changed that line of thinking. Now with all of the points available from the stages, there has been a return to “points racing.” This time around it has put a premium on every crew chief to come up with a strategy that will give his driver the best opportunity to collect as many points as possible in each of the three stages. So far we have seen some crew chiefs try to collect as many bonus points as possible during the first two stages while others may go for the bonus points of the first round and then position themselves for a shot at the win after the third stage while foregoing any of the second stage points.

It’s either going to be a win or the points that will give a driver the opportunity to run for the title. Either way, there are going to be some drivers that we usually see advance on to the championship round on the outside looking in as both wins and points will be hard to come by over the next 10 weeks.

PIT NOTES: The silly season of NASCAR continues to heat up about which drivers may be moving into a different ride for the 2018 season. It appears that filling the seat of Dale Earnhardt Jr. at Hendrick Motorsports will be the key move that will be made before many of the other seats are filled. There is no front-runner so far, but it appears owner Rick Hendrick will have to decide between a veteran who would instantly become a contender or hope to find another young driver like Chase Elliott, who is in his second year with Hendrick and has already established himself as a contender for the win each week. It will be a tough call, but he has a great track record of making the right selection.