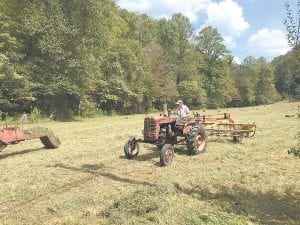 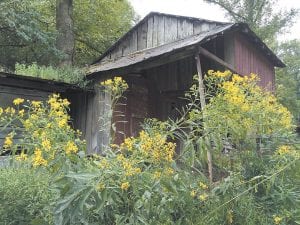 Joe Ison, above, used his family’s early-50’s model Farmall tractor while Nathan Roark (not pictured) ran the bailer as they were making their second cutting of hay in a 5-acre field at Linefork near Gordon last week. Ison said the field was once used to raise corn as feed for hogs that stayed around the old pen pictured at left before his father, the late Quentin Ison, started raising cattle instead and needed the field for hay. (Photos by Ben Gish)