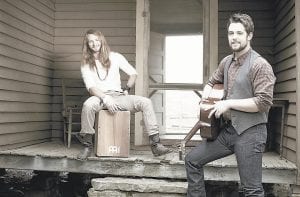 Sundy Best will headline Whitesburg’s Fourth of July Celebration. Prestonsburg natives Kris Bentley and Nick Jamerson will take the stage at 8 p.m. at River Park. The fireworks display will start at dark.

Sundy Best is no stranger to Whitesburg. The Lexington country rock duo has performed here quite a few times, even before releasing their two successful albums, “Door Without a Screen” and “Bring Up the Sun.”

Prestonsburg natives Kris Bentley and Nick Jamerson first played in Letcher County at Summit City before becoming known as Sundy Best. The duo has also performed at a packed StreetSide Grill and Bar.

“We have a lot of support obviously in that area being from basically right around there,” said Bentley. “It is always a good time.”

Sundy Best headlined the Agrestic Music and Arts Festival on June 7 at River Park in Whitesburg. Bentley and Jamerson have performed at the event the past two years to raise money for the Letcher County Autism Support Group.

“It was great,” said Bentley. “This year was an even better turnout than last year. It is something we are honored to be a part of.”

With Jamerson on guitar and Bentley playing the cajon, Sundy Best will return to River Park Saturday night to entertain the masses at the City of Whitesburg’s Fourth of July Celebration.

“Some of our best crowds and shows are back in eastern Kentucky just because everyone is singing along and interacting with what we are doing,” said Bentley. “It’s usually something that is pretty special. I’m sure it will be the same thing, especially on the Fourth of July.”

Bentley said it never gets old to look out into the crowd and see people singing lyrics to songs that he and Jamerson have written.

“Anytime we are playing at home it is kind of overwhelming with how many people are in tune with what we are doing and recognize each song we play,” said Bentley. “It’s pretty cool.”

Being so close to home, there’s a good chance that family members of Bentley and Jamerson will be at Saturday’s show.

“ That’s another good thing about playing back home,” said Bentley. “Our families can come out and see us because most if not all still live in the area.”

“We don’t refer to people who listen to us as fans,” said Bentley. “We like to keep it more like a family. We started using that term. There’s more of a connection between what we are writing and singing and the people that are listening to it.”

Bentley and Jamerson, who have been friends since elementary school, played music together in Floyd County churches during their high school years. The name Sundy Best refers to wearing their best clothing while in church.

After college, the friends began playing music together again. In the summer of 2010 Jamerson joined Bentley in Lexington. They worked for a cable company and performed at local establishments. The pair coined the name Sundy Best while playing at Redmon’s that November.

Rolling Stone magazine recently named Sundy Best as “one of 10 new artists you need to know.”

Sundy Best doesn’t have a standard genre of music in which to be classified. Bentley said songs on “Bring Up the Sun” have ‘70s classic rock sounds with a little pop, rock and bluegrass.

Bentley and Jamerson will take the stage at 8 p.m. on July 4.