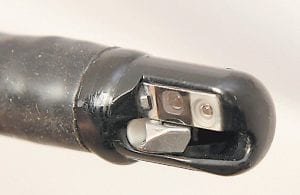 This photo shows the tip of an endoscopic retrograde cholangiopancreatography (ERCP) duodenoscope, attached to a long tube, not shown. (AP Photo/U.S. Food and Drug Administration)

A “superbug” outbreak suspected in the deaths of two Los Angeles hospital patients is raising disturbing questions about the design of a hard-to-clean medical instrument used on more than half a million people in the U.S. every year.

At least seven people — two of whom died — have been infected with a potentially lethal, antibiotic resistant strain of bacteria after undergoing endoscopic procedures at Ronald Reagan UCLA Medical Center between October and January. More than 170 other patients may also have been exposed, hospital offi cials said.

The infections may have been transmitted through two contaminated endoscopes that were used to diagnose and treat pancreatic and bile-duct problems. The instruments were found to have “embedded” infections even though they had been cleaned according to manufacturer’s instructions, said Dr. Robert Cherry, the hospital’s chief medical and quality officer. Five other scopes were cleared.

Health officials hope to reassure the public that there is no broad danger.

“This outbreak is not a threat to public health,” said Dr. Benjamin Schwartz, deputy director of acute communicable disease control and prevention for the LA County Department of Public Health.

Infections of carbapenem resistant Enterobacteriaceae, or CRE, have been reported at hospitals around the country, and some have been linked to the type of endoscope used at UCLA. The duodenoscope is a thin, flexible fiber-optic tube that is inserted down the throat to enable a doctor to examine an organ. It typically has a light and a miniature camera.

Doctors first discovered the problem in mid- December when a patient underwent an endoscopic procedure and developed an infection that couldn’t be treated with antibiotics.

It was determined that CRE infections had been passed on from one “source case” patient between October 3 and January 28, Rubin said.

The hospital has notified potentially exposed patients through letters and phone calls and is offering free testing and treatment options.

Attorney Kevin Boyle said last week that one of his clients, an 18-year-old student, was among those infected after he entered the hospital for a procedure that involved using an endoscope to examine his pancreas.

“After he had the procedure he was released. Then he came down with his illness, and when they studied him and noticed he had the CRE bacteria in him they quickly put two and two together,” he said.

Boyle declined to release the teenager’s name or say where he attends school but said he spent 83 days in the hospital at one point and was released but recently relapsed and is currently hospitalized. He said the family doesn’t blame UCLA but is considering suing the endoscope’s manufacturer.

Health inspectors visited UCLA after being notified and found “no breaks and no breaches” in its disinfection process, Schwartz said.

“You can very easily do everything right and still have some contamination,” said Dr. Deverick Anderson, an infectious-disease expert at Duke University. “We’re finding this is a problem, but it’s probably one that we don’t have a very good solution to right now.”

The U.S. Food and Drug Administration last week issued an advisory warning doctors that even when a manufacturer’s cleaning instructions are followed, germs may linger.