‘SuperFetch’ puts ‘can’ in canine 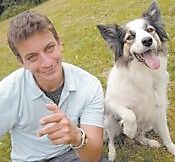 Maybe you don’t worry about spoiling your new manicure before your nails can dry. But Anne does.

Maybe you don’t have a problem with company leaving your toilet seat up or, worse, forgetting to flush. Kimberly does.

Fortunately, they are both owners of dogs that, with the right kind of training can lend a helpful paw.

Thanks to pet trainer extraordinaire Zak George, that’s happening on “SuperFetch,” which puts the “can” in canine on Saturdays at 8 p.m. on Animal Planet. It’s educational and fun, for dogs and humans alike.

“‘SuperFetch’ is the first show that doesn’t focus on fixing a broken dog,” says George. “We look for people who are interested in interacting with their dog, taking their relationship with their dog to the next level, and making their already great dog even greater.”

On the first episode, which aired Oct. 3, George stepped in to craft a training plan for Anne and her English cocker spaniel, Oliver.

Oliver learned how to save her manicure by plucking cash from her purse to pay the manicurist and, when he and Anne arrive home, grabbing the house keys to open their front door.

Then Kimberly’s Bernese mountain dog, Bear, learned how to drop the toilet seat and flush on command whenever Kimberly’s boyfriend or brother has failed to do so.

Another episode found George furnishing tips on how to teach a bulldog to tend bar and an Australian shepherd to bowl.

In the future, look for answers to questions such as these: Can a dog serve as “wingman” to help her dateless owner meet women? Make the bed? Square dance? Or fetch a beer from the fridge for his master, who is relaxing on the sofa?

George says the key to the process is making it fun for the dog, which means identifying the “currency” the dog values most: snacks for a job well done, or maybe camouflaging the learning process as a familiar game the dog already loves.

“Dogs want to please us, but they also want to know what’s in it for them,” George notes.

It’s basic problem-solving: You break the trick into steps, and if you can make each step amusing, your dog (and you) will be all the more motivated.

A 30-year-old Atlanta native, he used to sell real estate until six years ago. Then he became the proud owner of Venus, a brainy border collie.

“Once I saw her potential, I needed to come up with an excuse to work with her every waking moment of the day,” he says. That led to a new career for George as a pet trainer and, with Venus, a celebrity couple on YouTube videos and TV appearances including “Late Show With David Letterman.”