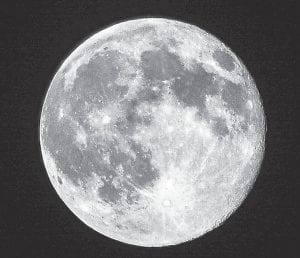 Clear skies on the night of July 12 provided this view of a spectacular full moon over Letcher County — the first full moon after the summer solstice. If you missed seeing the spectacle, photographer Timothy Hudson of Jeremiah snapped this shot from atop Pine Mountain, near the entrance to Little Shepherd Trail near Whitesburg. “Around this time of year in North America,” says the Internet site EarthSky. org, “buck deer start growing antlers, thunderstorms rage and farmers struggle to pile up hay in their barns. Thus, according to folklore, we call this full moon the Buck Moon, Thunder Moon or Hay Moon. The July 2014 full moon is also the first of three full-moon supermoons in 2014. Previously, we had two supermoons in January — on January 1 and 30 — but they were ‘new-moon’ supermoons. The full moons on July 12, August 10 and September 9 all enjoy the supermoon designation because the centers of these these full moons and the center of the Earth are less than 224,851 miles apart.” EarthSky.org also points out the coming August 10 full moon will be the closest to Earth this year at only 221,765 miles. Here’s hoping Mr. Hudson returns to the same spot so we can compare. (Photo by Timothy Hudson)