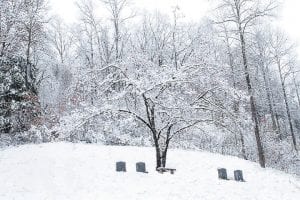 AT LEAST IT WAS BEAUTIFUL — Casey Sexton of Thornton took this photo in Wolfpen Drive. It is one of a number of scenes local photographers submitted to The Mountain Eagle’s Facebook page. To see them, visit www.facebook.com/ItScreams. (Photo by Casey Sexton)

Schools remained closed Wednesday and trick-or-treating was rescheduled until Friday as Letcher County coped with an unusual October snowstorm caused by Hurricane Sandy.

“This is unusual this early,” said Letcher County Judge/Executive Jim Ward. “It’s a heavy, wet snow. Trees still had a lot of leaves and it has made it worse where snow is hanging to leaves and making it heavier.”

Letcher is one of three eastern Kentucky counties hit the hardest by the snow generated by Sandy, which made landfall in New Jersey Monday night and will end up causing about $20 billion in property damages. Harlan and Pike counties also felt effects of the snow.

Higher elevations in Letcher County received about a foot of snow on Tuesday morning while some areas only received about an inch and a half of snow, said Ward. The area ranging from Mayking to Jenkins and across Pine Mountain received the most snowfall, with snow varying from four to 12 inches. Pound Gap of Pine Mountain had about 12 to 14 inches of snow while six to eight inches fell at nearby Payne Gap. 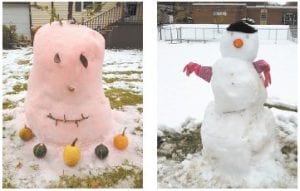 FUN IN THE SNOW — A snow pumpkin (left) was built at Little Cowan Tuesday by Phillip, Beth and Maggie Little. Leisha Fleming and Kayla Thomas built the snowman (right) in front of the McRoberts Elementary School. These and other photos of snow scenes can be viewed at www.facebook.com/ ItScreams or by searching The Mountain Eagle on Facebook.

At noon Tuesday, 3,396 homes Letcher County homes were without electricity, according to Kentucky Power Company. While service was restored to the majority of those homes by early Tuesday night, Kentucky Power company officials say it could be Friday afternoon before all customers affected by the storm are returned to service. Areas hit hardest by the power outages included Cowan, Deane, Jenkins, Kona, Mayking, McRoberts, Millstone, Neon and Smoot Creek. In most instances, the electricity went off after snow-laden trees and tree branches, weakened by wet soil conditions, snapped and fell across power lines and utility poles.

Judge Ward said trees were down in roads at Bull Creek Mountain in Blackey, Bentley Loop in Jenkins, March Drive in Thornton, Slick Rock Road in Pert Creek and Bowman Creek at Eolia.

Shelters are open at the senior citizens centers in Boonefork, Colson, Ermine and Jenkins.

Road conditions were hazardous in parts of the county Tuesday morning including US 23 on the Kentucky/ Virginia line. Two tractor-trailer rigs jackknifed on US 23 at Pound Gap, stopping traffic going into Virginia from Letcher County. No injuries were reported. Both northbound and southbound lanes of US 23 were backed up for some time as state highway workers and Kentucky State Police troopers assisted the Virginia Department of Transportation.

Ward said the county has dealt with worse snowstorms, particularly the snowstorm in December 2009 when many residents were without power for at least a week.

Gov. Steve Beshear declared a state of emergency in Kentucky in the wake of the hurricane. The order directs the Transportation Cabinet to waive special registration and permit requirements for vehicles carrying relief supplies such as food, water and medicine. The waiver also applies to utility vehicles that are responding to power outages or removing debris.

The U.S. death toll from Sandy climbed to 39 on Tuesday, many of the victims killed by falling trees.

The full extent of the damage in New Jersey, where the storm roared ashore Monday night with hurricane-force winds of 80 mph, was unclear. Police and fire officials, some with their own departments flooded, fanned out to rescue hundreds.

“We are in the midst of urban search and rescue. Our teams are moving as fast as they can,” Gov. Chris Christie said. “The devastation on the Jersey Shore is some of the worst we’ve ever seen. The cost of the storm is incalculable at this point.”

More than 8.2 million people across the East were without power. Airlines canceled more than 15,000 flights around the world, and it could be days before the mess is untangled and passengers can get where they’re going.

Lower Manhattan, which includes Wall Street, was among the hardest-hit areas after the storm sent a nearly 14-foot surge of seawater, a record, coursing over its seawalls and highways.

Water cascaded into the gaping, unfinished construction pit at the World Trade Center, and the New York Stock Exchange was closed for a second day, the first time that has happened because of weather since the Blizzard of 1888.

A huge fire destroyed as many as 100 houses in a flooded beachfront neighborhood in Queens on Tuesday, forcing firefighters to undertake daring rescues. Three people were injured.

Sandy also brought blizzard conditions to parts of West Virginia, where 268,000 customers were without power late Tuesday afternoon as two feet of snow were expected in some places.

In Letcher County, countywide trick-or-treating has been rescheduled to begin at 6 p.m. and last until 8 p.m. on Nov. 2.

The City of Whitesburg’s safe night will also be held downtown on Nov. 2. Businesses and organizations are encouraged to give out candy from 6 until 8 p.m.

A “trunk-or-treat” event will take place in the parking lot of First Baptist Church of Whitesburg from 6 until 8 p.m. on Nov. 2. Church members will decorate the trunks of their cars and hand out candy.

The City of Fleming-Neon’s safe night will be held from 5 until 8 p.m. at the city stage area on Nov. 2.

A safe night sponsored by the City of Jenkins and the Jenkins Homecoming Days Festival Committee is set for noon on Saturday, Nov. 3 at Jenkins City Park.