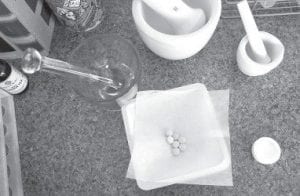 Supplement pills were being sorted for testing by Dr. William Obermeyer of ConsumerLab.com when this photo was taken. A surprising number of supplements tested don’t match what the label says. (AP Photo)

Lead in ginkgo pills. Arsenic in herbals. Bugs in a baby’s colic and teething syrup. Toxic metals and parasites are part of nature, and all of these have been found in “natural” products and dietary supplements in recent years.

Set aside the issue of whether vitamin and herbal supplements do any good.

Are they safe? Is what’s on the label really what’s in the bottle? Tests by researchers and private labs suggest the answer sometimes is no.

One quarter of supplements tested by an independent company over the last decade have had some sort of problem. Some contained contaminants. Others had contents that did not match label claims. Some had ingredients that exceeded safe limits. Some contained real drugs masquerading as natural supplements.

“We buy it just as the consumer buys it” from stores, said Dr. Tod Cooperman, president of ConsumerLab.com. The company tests pills for makers that want its seal of approval,

and publishes ratings for subscribers, much as Consumer

Reports does with household goods.

“There’s at least 10 times more hoodia sold in this country than made in the world, so people are not getting hoodia,” said Dr. Mehmet Oz, a heart surgeon and frequent Oprah Winfrey guest who occasionally has touted the stuff.

Industry groups say that quality problems are the exception rather than the rule.

“I believe that the problem is narrow, that the well-established and reputable brands deserve their reputations,” said Michael McGuffin, president of the American Herbal Products Association.

Of course, prescription drugs have had problems, too. Dozens of deaths were linked last year to tainted heparin, a blood thinner produced in China, for example. However, pharmaceutical drugs must show evidence to the government of safety and effectiveness before they go on sale. Not so for dietary supplements.

Fifteen years ago, Congress passed a law that treats supplements like food and allows them to go straight to market without federal Food and Drug Administration approval. The FDA can act only after consumers get sick or a safety issue comes to light.

“We called it ‘the body rule,'” said William Obermeyer, a chemist who left the FDA to found ConsumerLab.com with Cooperman. If a supplement was harmful, “we had to have so many adverse events before we could make a move on it. It was really like closing the barn door after all the animals left.”

The law said the FDA could write quality control rules for products sold in the U.S. It took the FDA 13 years to adopt these, and they are just now taking effect. But the rules do not say what tests companies must do to prove what is in their products, and some tests can be fooled by subbing other ingredients. The rules also set no limits on toxins such as lead; nor do they change the fundamental way these products are sold to the public.

“It leaves the level of quality up to the manufacturer,” Cooperman said.

In a written statement, FDA spokeswoman Susan Cruzan said the new rules contain what is “needed to ensure quality,” and that products that contain contaminants or whose labels do not honestly describe their contents, are considered adulterated and subject to further action by the agency. But she conceded that the agency is spread thin.

“In that FDA has limited resources to analyze the composition of food products, including dietary supplements, it focuses these resources first on public health emergencies and products that may have caused injury or illness,” she wrote.

Millions of Americans take vitamin, herbal or other dietary supplements. Annual sales exceed $23 billion, and more than 40,000 products are on the market. Tens of thousands of supplement-related health problems are handled by U.S. poison control centers each year, according to a report in the New England Journal of Medicine in 2002.

Until last year, supplement makers were not required to report problems to the FDA, and even now they must report only serious ones. The agency estimates that more than 50,000 safety problems a year are related to supplement use.

The Institute of Medicine, an independent science panel that advises the government, studied the situation in 2005.

“The committee is concerned about the quality of dietary supplements in the United States. Product reliability is low,” says its report, which urged amending the 1994 law to tighten consumer protections.

Trade associations say the FDA’s new rules do that.

“We are FDA-regulated products,” though not in the same way as prescription or over-the-counter drugs, said Steven Mister, president of the Council for Responsible Nutrition.

Although many people take supplements with no apparent ill effects, there have been many quality problems that a consumer might never realize because they don’t always produce symptoms:

ConsumerLab.com found lead in at least one brand each of zinc, black cohosh and ginkgo products tested in recent years. Lead can accumulate and cause many health problems, and the testing company wants a national limit of 0.5 micrograms per day — a level that in California requires a warning on the label.

A fungal toxin was found in four red yeast rice products in March 2008. And in 2007, federal officials warned about a liquid herbal supplement sold for colic and teething pain after finding cryptosporidium, a waterborne parasite that causes severe diarrhea.

Metals naturally accumulate in certain herbs and come from the soil they are grown in. Many supplement ingredients come from Europe, India and China.

In ConsumerLab.com testing last November, four out of seven supplements contained less ginkgo than claimed on their labels, and one failed to break apart properly to release its ingredients. Seven out of nine failed in tests in 2003, as did six out of 13 in 2005.

“It is now believed that ginkgo is among the most adulterated herbs,” the company reports.

Tests by California scientists of two dozen ginseng supplements, reported in a nutrition journal in 2001, found that many differed from their labels. The concentrations of some ginseng compounds varied by up to 200-fold from product to product.

In ConsumerLab.com tests, six out of nine chondroitin supplements failed testing in April 2007. One had only 8 percent of what it claimed to contain, and one “maximum strength” product had none.

Last year, nearly 200 people were sickened by supplements containing up to 200 times the amount of selenium stated on the label.

Hidden Prescription Drugs The FDA has repeatedly warned about herbal pills found to contain versions of Viagra and similar drugs to help men get an erection. These can pose a heart hazard, especially when taken with certain medications.

In December, the FDA expanded warnings about dozens of brands of weight loss pills that contained prescription drugs not disclosed on labels.

Ginkgo, vitamin K, garlic, ginseng and other herbals can cause bleeding or clotting problems if taken with certain medications or before surgery. St. John’s wort, promoted for depression, affects metabolism of more than half of all prescription drugs and can undermine birth control pills. Other supplements that can interfere with medicines include glucosamine, saw palmetto, soy and valerian.

Even “safe” supplements can be harmful. Beta-carotene takers still had increased rates of lung cancer six years after one study was stopped. These supplements “appear to increase rates of the disease, particularly among smokers,” the National Cancer Institute warns.

In another study, men taking vitamin E were slightly more likely to get prostate cancer, and those taking selenium were a little more likely to develop diabetes. The results could have been due to chance, but federal officials stopped the study last October.

Other studies suggest that high doses of vitamin C may help shield cancer cells from treatments designed to kill the cancer.

“Antioxidants are not the magic bullets that the supplement industry would like consumers to believe,” said David Schardt, a nutrition expert with the consumer advocacy group, the Center for Science in the Public Interest. “They’re not even necessarily benign.”