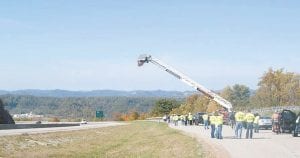 A rest stop along U.S. 23 near Pound Gap at the Kentucky-Virginia state line was the staging area for Letcher County residents participating in the “United for Coal” rally held over the weekend. (Photo courtesy Tabitha Collier Muncy)

The honking of horns was deafening along U.S. Highway 23 in southwest Virginia on Saturday, where hundreds of people stretched out along the four-lane road to show their support for coal.

“If coal gets shut down, everything’s going to get shut down,” said Thomas Peak of Big Stone Gap, who came straight from work at a local mine for the demonstration, his face still covered in coal dust.

“ I’d lose my house, I’d lose my vehicles, I’ve got three kids,” he said. “Everybody around here would lose everything they had.”

Groups of coal supporters that lined up sporadically along this Virginia highway were among thousands of people who turned out in at least three states to put a human face on an embattled industry. Its plight has become an issue in the presidential as well as in local and statewide races, with Republicans asserting that Democratic environmental policies are hurting the industry, a charge denied by the Obama administration. 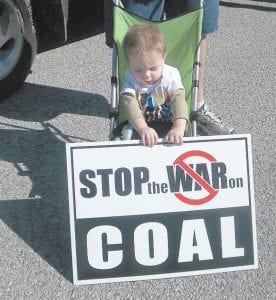 15-month-old Bryson Muncy was among those taking part in the rally held over the weekend near Pound Gap in Letcher County. (Photo courtesy Tabitha Collier Muncy)

Many of those gathered voiced similar feelings: they believe politicians and environmentalists are to blame for thousands of recent coal-industry layoff s, which have left some families struggling to pay their bills and local governments hard-pressed to balance their budgets as severance tax revenue drops.

“The average coal mining job is a $70,000 job, and that’s a low figure. Multiply that by 10,000 people (who have lost coal jobs around the country). You can’t replace $700 million in the economy,” said Chris Meade, general manager for a mining supply company in Big Stone Gap. “For every coal job they take, if they want to bring in a green energy job, we’ll build solar panels. We’ll build windmills. But we’ve got coal” already. 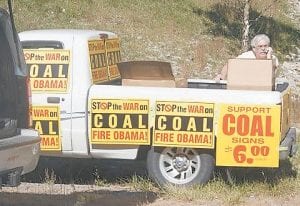 The event was largest around Pikeville, said Kendall

Wright, who flew his helicopter over the event Saturday to help photographers and videographers get a look at the crowds. He estimated that about 5,000 people turned out in the area around Pikeville and toward the West Virginia line.

In an hour-long event organized largely through Facebook, some of those gathered stretched out along the roadside holding hands. Others stood on their vehicles holding signs. Traffic was slow through some areas as vehicles slowed down to look and honk, some displaying signs or American flags.

Some of them were coal miners and their families. Others were just community supporters.

“Paul works for Alpha Coal (referring to Alpha Natural Resources). I sell truck tires. Chris, he sells mining supplies,” said Chris Williams, who owns a tire shop in Appalachia, explaining why he and several relatives were on the side of the road, sporting fluorescent yellow “United for Coal” t-shirts. “Everybody here’s affected by one way or another.”

Brittanee Stacy, who works at a tanning salon, said she would be out of a job without coal.

“In this area, the area we live in, 80 percent of the women who come in and tan, their husbands are affiliated in some way with coal,” she explained. “So without coal we wouldn’t be able to make it.”

Afterward, more than 500 people turned out for a rally in Pikeville, said Jesse Salyer, one of the event organizers. He said the rally featured “stump speaking” by local politicians and others, on the difficulties facing coal communities and the surrounding politics .

He said he’s hopeful the nation’s leaders saw the size of the demonstration in support of coal.

“I think they will see us in November when we get out and vote,” he said.