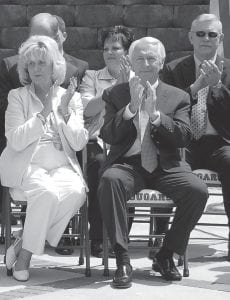 Craft’s surprising announcement was contained in a letter read near the end of a specialcalled meeting held by the Letcher County Board of Education Monday night to address a review of Craft’s contract and to hire a school board attorney and board secretary.

Craft asked Board Attorney Darrell Hall to read the letter after she had met with the board in closed session and just before new Board Chairman Robert Kiser began to address the agenda item pertaining to the review of Craft’s contract with the board.

“Please accept this notice of my intent to retire effective June 30, 2013,” Craft wrote in the letter she had given to Hall earlier. “It has been my pleasure and honor to work with the previous board of education, parents, students and staff and our educational community to make our school system better each and every day. Thank you for the opportunity to serve in a wonderful school district.”

Hall’s reading of Craft’s letter drew little reaction from board members, other than Kiser’s order that the document be made part of the board’s official minutes.

During Craft’s tenure the Fleming Neon, Letcher and Whitesburg high schools were consolidated into Letcher County Central High School, which occupied the old Whitesburg campus for nearly a year before moving to its current location at Ermine in spring 2006. A 600-seat auditorium, which is located in the high school, is used by schools in the district as well as community groups.

Craft was also instrumental in getting state-of-the-art football and baseball fields built at the new high school. A new softball field, two new tennis courts and a new golf putting green are scheduled for completion this spring.

Craft spearheaded the drive to raise funds needed to build the new Letcher County Area Technology Center, which is located adjacent to LCCHS.

Craft was also unafraid to address issues such as closing elementary schools and reorganizing middle schools where she believed declining enrollments and poor test scores made them no longer feasible to operate.

Under Craft’s leadership, algebra and Spanish classes are being offered at the middle school level for the first time. Craft has also placed an emphasis on offering music and art education in the schools, a decision that has resulted in organized band being offered to students beginning in fourth grade. She has also overseen the development of top-notch drama and speech programs in the district. Golf, archery, wrestling and soccer were also added to the district’s team sports offerings with Craft at the helm.

As a pilot program, breakfast and lunch are provided to all students in the district free of charge this school year.

Before Craft asked Hall to read her letter, the board had spent 90 minutes in a closed or “executive” session to discuss “personnel issues.”

After Kiser announced that no action was taken in the closed session, the board approved a motion to rehire Debbie Cook as board secretary beginning March 1 and to set Cook’s salary at $6,175 for one year.

The board also voted to rehire Darrell Hall as board attorney beginning March 1. Hall will be paid $110 per hour.

At the school board meeting in January, the board discussed the possibility of having early release one day a week for all schools in the district in an effort to alleviate the amount of time teachers spend doing paperwork after school. Early release is time for teachers to work on lesson plans, participate in Professional Learning Communities (PLC) and have job embedded professional development.