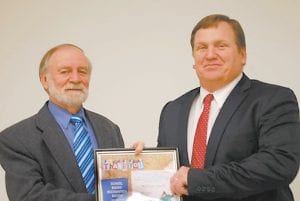 Letcher Schools Supt. Tony Sergent (right) and School Board Chairman William Smith are seen in a photo taken during a board member appreciation event. Sergent announced his retirement earlier this week after serving as superintendent for five years.

The Letcher County Board of Education voted this week to hire the Kentucky School Boards Association (KSBA) to help in the search for a new school superintendent. The board took the action after current Supt. Tony Sergent announced he would retire at the end of September.

Board Chairman William Smith said that while the search for a new superintendent will be “expedited,” he believes the board will have to hire an interim superintendent until a permanent replacement can be found.

“We’re on top of it,” Smith said after meeting with Sergent Tuesday afternoon.

Sergent, 53, announced his retirement Monday night during the board’s August meeting. He told The Mountain Eagle on Tuesday that he had thought about retiring at the end of the last school year and decided to keep the job at least one more year, but recently decided “it was time” to leave the post he has held since July 1, 2013.

“I think everybody realizes when it’s time,” Sergent said. “There’s no drama to it. … I’m leaving happy and I’m happy with where the school district is.”

Sergent, a Letcher County native who was graduated from Whitesburg High School and Morehead State University, began working for the school system as a mathematics teacher 31 years ago. Along the way to becoming superintendent, he served as head football coach at Whitesburg High School and accepted a principal’s job after WHS was closed and merged with Fleming-Neon and Letcher high schools to form Letcher County Central High School. He was director of the school district’s Continuous Instructional Improvement Technology System after he was hired by the board in June 2013 to replace former Supt. Anna Craft.

Smith, the board chairman, said Sergent has worked hard to improve the school system’s financial and academic standings during his five years in the superintendent’s office.

“He’s got us in good shape financially and our test scores are up,” said Smith, who has served on the school board for several years. “He’s one of the best I ever worked with. He’s going out on top. He’s wonderful to work with. The board can’t say enough good things about him.”

When Sergent took the office of superintendent, the district was facing a budget deficit of some $600,000 and was listed as a “needs improvement” district academically after student test scores came in well below the expected level of “proficient.” The district is now rated as “distinguished” in academics and operates in the black financially despite huge cuts in the local tax base brought on by the demise of the coal industry here.

The first budget Sergent delivered to the school board, for the 2014- 15 academic year, included $700,000 in cuts he achieved by taking steps such as ordering the closing of the Letcher County School Channel, declining to buy new school buses, and the trimming of administrative jobs.

While those cuts were in keeping with Sergent’s rule that “if it’s good for the kids you spend it, if it’s not you don’t,” he said that having to cut jobs that affected people he knew and liked made for some periods of “high stress.”

In addition to the financial and academic improvements he oversaw, Sergent is also proud of the improvements that have been made to the district’s buildings and grounds during his time at the helm. Nearly all of the district’s elementary schools now have new playground equipment and most of the buildings are more energy efficient.

“You have to leave it better than you found it,” he said.

Sergent said he plans to spend his time in retirement hunting and fishing and “antiquing,” a hobby that he shares with his wife, Annette, who retired four years ago.

“I’m kind of looking forward to that,” he said smilingly. “And I love to hunt and fish.”