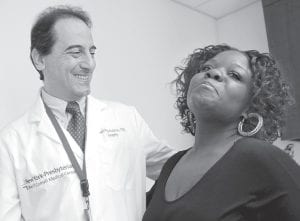 New research gives clear proof that weight-loss surgery can reverse and possibly cure diabetes, and doctors say it should be offered sooner to more people with the disease — not just as a last resort.

The two studies, released this week, are the first to compare stomach-reducing operations to medicines alone for “diabesity” — Type 2 diabetes brought on by obesity. Millions of Americans have this and can’t make enough insulin or use what they do make to process sugar from food.

The results were dramatic: Some people were able to stop taking insulin as soon as three days after their operations. Cholesterol and other heart risk factors also greatly improved.

Doctors don’t like to say “cure” because they can’t promise a disease will never come back. But in one study, most surgery patients were able to stop all diabetes drugs and have their disease stay in remission for at least two years. None of those treated with medicines alone could do that.

“It is a major advance,” said Dr. John Buse of the University of North Carolina at Chapel Hill, a prominent diabetes expert who had no role in the studies. Buse said he often recommends surgery to patients who are obese and can’t control their blood-sugar through medications, but many are leery of it. “This evidence will help convince them that this really is an important therapy to at least consider,” he said.

The studies were published online by the New England Journal of Medicine, and the larger one was presented Monday at an American College of Cardiology conference in Chicago.

More than a third of American adults are obese, and more than 8 percent have diabetes, a major cause of heart disease and strokes. Between 5 million and 10 million are like the people in these studies, with both problems.

For a century, doctors have been treating diabetes with pills and insulin, and encouraging weight loss and exercise with limited success. Few very obese people can drop enough pounds without surgery, and many of the medicines used to treat diabetes can cause weight gain, making things worse.

Surgery offers hope for a long- term fix. It costs $ 15,000 to $ 25,000, and Medicare covers it for very obese people with diabetes. Gastric bypass is the most common type: Through “keyhole” surgery, doctors reduce the stomach to a small pouch and reconnect it to the small intestine.

One previous study tested stomach banding — a less drastic and reversible procedure for limiting the size of the stomach. This technique lowered blood sugar, but those patients had mild diabetes. The new studies tested permanent weight-loss surgery in people with longtime, severe diabetes.

At the Cleveland Clinic, Dr. Philip Schauer studied 150 people given one of two types of surgery plus standard medicines or a third group given medicines alone. Their A1c levels — the key blood-sugar measure — were over 9 on average at the start. A healthy A1c is 6 or below.

One year after treatment began, only 12 percent of those treated with medicines alone were at that level, versus 42 percent and 37 percent of the two groups given surgery.

Use of medicines for high cholesterol and other heart risks dropped among those in the surgery groups but rose in the group on medicines alone.

“Every single one of the bypass patients who got to 6 or less got there without the need for any diabetes medicines. Almost half of them were on insulin at the start. That’s pretty amazing,” said a study coleader, Dr. Steven Nissen, the Cleveland Clinic’s cardiovascular chief.

An obesity surgery equipment company sponsored the study, and some of the researchers are paid consultants; the federal government also contributed grant support.

The second study was led by Dr. Geltrude Mingrone at the Catholic University in Rome and Dr. Francesco Rubino, diabetes surgery chief at New York- Presbyterian Hospital/Weill Cornell Medical Center. It involved 60 patients given one of two types of surgery or medicines alone, and set a goal of an A1c of 6.5 — the definition of diabetes.

Two years later, 95 percent and 75 percent of the two surgery groups achieved and maintained the target blood-sugar levels without any diabetes drugs. None of those in the medicine-alone group did.

There were signs that the surgery itself — not just weight loss — helps reverse diabetes. Food makes the gut produce hormones to spur insulin, so trimming away part of it surgically may affect those hormones, doctors believe.

Weight-loss surgery “has proven to be a very appropriate and excellent treatment for diabetes,” Rubino said. “The most proper name for the surgery would be diabetes surgery.”

Dr. Alvin Powers, director of the Vanderbilt University diabetes center, said the results are very encouraging for people like those in these studies — very obese, with diabetes that can’t be controlled through less drastic means.

“ We still don’t know the long-term outcomes of these surgeries” and whether benefits will last for more than a few years, he said.

Others were more positive.

The studies “are likely to have a major effect on future diabetes treatment,” two diabetes experts from Australia, Dr. Paul Zimmet and George Alberti, wrote in an editorial in the medical journal. Surgery “should not be seen as a last resort” and should be considered earlier in treating obese people with diabetes, they wrote.

Jon Diat is a success story. Diat, 50, who works at Citigroup and lives in New York, had been piling on pounds and pills for cholesterol and high blood pressure. After he needed an artery-opening procedure he was diagnosed with diabetes, but medicines for that failed to keep his disease under control and worsened his obesity.

“I was maxed out on the medications. It was very grim,” he said. Two years ago, he had weight- loss surgery from Rubino.

“They told me, ‘You’re going to see rapid results,’ but it was amazing. I literally lost 70 pounds in the first three months,” he said. “I was off insulin within less than 72 hours of surgery. I am in complete, total remission of diabetes. My blood sugars are normal.”

Now he eats right, plays tennis and hockey, walks the two miles home from work and takes 12 flights of stairs to his apartment.

“I look at this as a second chance at life,” he said. “It’s been liberating.”