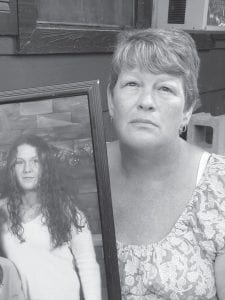 Tammy Ratiliff posed with a portrait of her daughter, Amy, a victim of Timothy Shelby’s murderous rampage. (Photo by Bill Estep/Lexington Herald-Leader)

Graveside services were held over the weekend for the last of three Jenkins residents murdered by 58-year-old Timothy Lee Shelby before Shelby turned his gun on himself and committed suicide.

Jennifer Walters, 35, was buried Saturday after a private service at the Pendleton Cemetery at Pert Creek near Whitesburg.

Walters, who was Shelby’s girlfriend, is believed to have been the first person killed during a murderous rampage Shelby began late August 1 and ended early August 2. Her body was found inside Shelby’s home in the Lakeside area of Jenkins after the bodies of Amy Lynn Ratliff, 31, and Joshua Lee Wyatt, 25, were discovered inside Ratliff ’s home at Ginseng Drive. Shelby’s body was also found inside Ratliff ’s home.

The funeral for Walters was held the day after Shelby, a retired U.S. Postal Service worker and Marine Corps veteran, was buried at Green Acres Cemetery at Ermine.

Meanwhile, police are continuing what is expected to be a long investigation into Shelby’s crimes while victims’ family members try to come to terms with the loss of their loved ones.

Amy Ratliff ’s mother, Tammy Lynn Wright Ratliff, was feeling somewhat relieved this week after being reassured by an investigator on Monday that her daughter most likely did not have any knowledge of what was happening to her when she was shot while sleeping in her bed, apparently early on August 2.

“That gives me peace, knowing she wasn’t in pain or fighting for her life,” Tammy Ratliff told The Mountain Eagle Tuesday.

While knowing that her daughter’s death was instant has helped ease her own pain somewhat, Ratliff, a 51-year-old retired nurse, says the sudden loss of Amy in such a violent manner remains almost more than she can bear.

“Every time my heart beats it aches,” Ratliff said.

Tammy Ratliff owns and lives next door to the home in which her daughter and Wyatt were killed. She said Kentucky State Police Detective Randy Combs reaffirmed to her on Monday that Amy was shot four times with a 10mm handgun — three times in the chest and once behind her left ear — while she lay sleeping on her right side with a shower towel still tucked neatly around her.

“He eased my mind,” Ratliff said of her conversation this week with Det. Combs. “He said Amy probably never flinched, because all of her wounds were fatal. She didn’t know what went on.”

While the investigation into the murders and suicide is expected to take weeks to complete, authorities have been told by at least one witness that Shelby went on the rampage because he was upset over a stolen wallet said to have contained some of the money Shelby had received from an insurance claim he filed after he wrecked his motorcycle on March 10.

Tammy Ratliff doesn’t believe there is any truth to the claim the missing wallet and money from a $6,000 settlement playing any role in the shootings and has let her feelings be known to Det. Combs.

“I just expressed to him I didn’t think there was any money involved, because Tim was in bankruptcy,” Ratliff said. “The wallet has never been found. I think it is just gossip.”

According to court records, Shelby declared bankruptcy in U.S. District Court in Pikeville on June 25, about three months after he was named in a civil lawsuit filed in Letcher Circuit Court seeking foreclosure on his Oak Street home in Jenkins. The foreclosure suit was filed by Embrace Home Loans Inc. on Trenton, N.J., a firm that specializes in mortgage refinancing and debt consolidation loans.

Tammy Ratliff says that during the afternoon of August 1, Jennifer Walters came to her home and asked to borrow $50 she now believes Walters needed to cover an overdraft on Shelby’s checking account.

“I told her I didn’t have $50 to give her,” Ratliff said of the request by Walters, whom she described as an “acquaintance” of Amy’s rather than being her daughter’s best friend as some have described her. “I’d say she over-drafted his account and was trying to put the money back in.”

Ratliff is confident that Amy didn’t take money from Shelby if any was in fact stolen from him.

“My daughter was not a thief,” she said. “She had never stolen anything in her life.

“This is my theory: I believe Jennifer Walters took that wallet, if it was taken, and that’s what got it all started. She went through his settlement lickety-split.”

Police first learned of some of the murders after Amy Ratliff ’s 17-year-old son, Jordan Ratliff, dialed 9-1-1 at 1:58 a.m. on August 2. Jordan found the bodies of his mother and her boyfriend and their killer after going into his mother’s home to retrieve an Xbox console. At the time, Jordan, a student at Jenkins High School, had been enjoying one of his last nights of summer vacation by riding bicycles and hanging out with Tim Shelby’s youngest son, Cody, and another friend. The three boys had planned to end their night of fun by playing video games inside Tammy Ratliff ’s home.

Tammy Ratliff said Jordan found Tim Shelby’s body on steps inside Amy Ratliff ’s home. Jordan discovered the body of Josh Wyatt, who had been shot once in the head executionstyle, at the doorway leading into the bedroom where his mother’s body lay on her bed.

After answering Jordan’s 9-1-1 call and securing the scene at Ginseng Drive, police then went to Shelby’s Oak Street home at Lakeside where they found the body of Jennifer Walters. She had been shot once under her nose.

Tammy Ratliff said she also received from Det. Combs this week an explanation of why police couldn’t enter Tim Shelby’s home after a third party had phoned in a report to 9-1-1 that Shelby had harmed Miss Walters.

After that first call was made to 9-1-1 about 11:30 p.m. on August 1, two Jenkins Police Department officers and two KSP troopers were dispatched to Shelby’s home, where they knocked on the doors and windows of a home that was dark and quiet. Ratliff said she was told by Det. Combs that because nothing seemed amiss at the home, no vehicles were in Shelby’s driveway, and the 9-1-1 call was made by a third party, police had no reasonable cause to force their way into the home.

“ He doesn’t think it would have made any difference, because Amy and Josh were probably already dead by then,” Ratliff said.

Tammy Ratliff said the trauma her family has suffered since the shootings was worsened by the fact it was left up to relatives to clean up the aftermath of the shootings. She hopes to use her family’s experiences to convince police and local governments to adopt a policy that would help the families of murder victims in such cases.

“My sister, Jennifer Johnson, had to clean up the killer’s blood,” said Ratliff, adding that Jennifer’s husband, Jamie Johnson, and their daughter Jenna Johnson also helped with the gruesome task.

“ They had to go buy mops and buckets and Clorox. The blood was so thick they had to scoop it up with a dustpan. We didn’t have any biohazard bags or anything.”

Ratliff said that in addition to her grandson Jordan finding his mother murdered, the youth also bravely accepted the task of removing the mattress on which Amy was found and burning it in the backyard along with sheets and pillows.

“We burned what we could, but you can’t burn piles of dripping blood,” Tammy Ratliff said.

Ratliff said she knows she will one day have to forgive Tim Shelby for the harm he has brought to her family and others, but that for now she remains “angry at him for what he did because it was senseless.”

“ I compare him to Charles Manson,” she said of Shelby. “He’s been like a ticking time bomb, and when you add alcohol he exploded.”

Ratliff said she can’t help but wonder what would have happened to her grandson Jordan and Shelby’s son Cody if they had been in Amy’s house at the time Shelby got there.

“I believe to my soul that if anybody else was in that house he would have killed them all,” she said.

Ratliff said one of the ways she has dealt with the loss of Amy has been visiting her grave every day since she was buried in the Ratliff family cemetery at Burdine on August 6.

“I talk to her just like I’m talking to you,” she said.

Ratliff said she would remember her daughter as a “sweet and loveable kid” who was “a hugger and a kisser.”

She said her daughter had been fighting the nerve disease multiple sclerosis since she was diagnosed at age 18, and was happy a new treatment she was under at the Leonard Lawson Cancer Center in Pikeville appeared to be working well and had kept her from going into relapse.

“It’s a horrible disease and there’s no cure for it, but she was just thrilled that she was feeling better with the Tysabri,” Ratliff said.

Amy’s funeral was held at the Dorton Freewill Baptist Church before a standingroom only crowd on the same day as Tammy Ratliff’s birthday.

“She had a wonderful and beautiful funeral, but there never should have been any funeral,” Ratliff said.

Tammy said that through the efforts of her parents and Amy’s grandparents, Wendell and Augustine Wright of Dorton, she did mark her 51st birthday in the presence and Amy’s two sons and other family members this past Sunday with cake and ice cream after they attended church together.

Ratliff said she believes that by the time the investigation into the murders and suicide is complete “a fifth person will be shown to be involved in this.”

“There’s something behind all this and eventually it will come out,” she said.

Federal bankruptcy court documents show Timothy Shelby with assets of $143,083, including the home he lived in at Lakeside and two coal camp houses at 156 and 157 Brickyard Hill. Shelby’s debts were listed at $114,960, including $103,908 owed to Embrace Home Loans.

The documents also show that Shelby earned $763.75 per month from the Letcher Fiscal Court by working as a tour guide at the Letcher County Veterans Museum in Whitesburg. He also drew $1,617 per month in Social Security benefits, and $155.18 and $129.01 in U.S. Postal Service and Veterans Administration benefits, respectively.

The documents also show that Shelby’s checking account with Whitaker Bank was overdrawn by $4.22 at the time the bankruptcy was declared in June.

Funeral services for Shelby were held August 9 in the chapel of Everidge Funeral Home, Whitesburg.

The son of the late James H. Shelby and Alene Bentley, Shelby, he was born in Boyle County on June 3, 1955.

In addition to Shelby’s work as a tour guide and his careers with the military and post office, he was a member of The Sons Of The Confederacy and enjoyed riding motorcycles and spending time with his family and friends, especially his grandchildren.

He was preceded in death by a grandchild, Alicia Sturgill, and an uncle, Jim Bentley.

No other information has been provided to the public about the funeral service for Walters or family members who survive her.

Amy Ratliff was born in Pike County on February 5, 1982. In addition to her mother, she is also survived by her father, Jeffery Lynn Ratliff of Jenkins.

Amy was preceded in death by her paternal grandparents, Marvin and Ardath Ratliff, and maternal grandmother, Barbra Sue Wright.

Joshua Wyatt was a son of Jennifer Whisman McLemore of Shallotte, N.C., and the late Darrell Wade Wyatt Sr. He was born in Whitesburg and had worked in the construction industry.