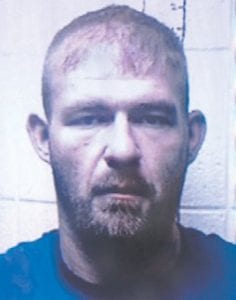 A Whitesburg man who had been on the Letcher County Sheriff Department’s most wanted list since running from an “active meth lab” last week was arrested Tuesday after he was found hiding in the closet of a Seco home.

The suspect, Chris Brown, was charged with manufacturing methamphetamine and fleeing and evading police after he was arrested by sheriff ’s department Sgt. Alisha Congleton and Captain Barry Engle.

Brown is one of four county residents suspected of operating an “active meth lab” inside a home at Big Cowan. The operation was discovered about 1 p.m. last Friday after Congleton and Engle were dispatched to the residence, located at 100 Astor Fields Road, after the sheriff ’s department received a complaint about trespassers in the area.

“Upon their arrival and their approach, the deputies detected the tell-tell signs of an active meth lab in or around the residence,” a sheriff ’s department news release says. “As they approached, four subjects fled out the back door and into a wooded area behind the home. Congleton and Engle were able to approach two of the individuals, Wendy Leigh Riley, 32, of Whitesburg, and Jessica Moberly, 35, of Isom. The other two, Chris Brown of Whitesburg, and Dylan Rayburn of Whitesburg, escaped into the woods.” 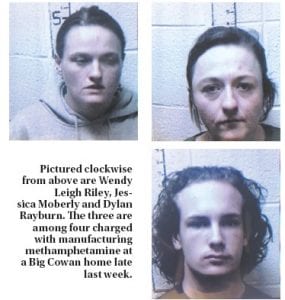 Riley and Moberly were charged with first-degree manufacturing methamphetamine and first-degree fleeing and evading police. Rayburn was arrested on the same charges after turning himself in later on January 20.

Congleton said an “anonymous tip” to the sheriff ’s office on Tuesday led to the capture and arrest of Brown, which occurred after she, Engle, and Fleming-Neon City Police Officer Allen Bormes entered the Seco home and found Brown inside the closet.