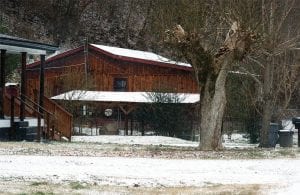 ONE MAN WAS SHOT outside this home at Black Bottom Jan. 3. Police arrested the resident this weekend, but the alleged shooter is still at large.

Kentucky State Police, Hazard City Police and the Perry County Sheriff ’s Department have arrested the owner of a Jeremiah home where a shooting occurred last week, but the alleged shooter is still at large.

Police went to the Daniel Boone Motel on January 7 in an attempt to find Eddie Collins, 42, of Jackhorn. Instead, police found Shiloh Cody Adams, 32, of Jeremiah, and Amanda Mullins, 41, both of whom were wanted on warrants in Letcher County.

Adams was living in a home at Jeremiah where one man was shot and wounded last Wednesday night.

That incident occurred shortly after 5:30 p.m., January 3, on a walkway outside the home belonging to Adams in the 400 block of Black Bottom Rd., just off KY 7 South at Jeremiah.

Kentucky State Police said Collins went to Adams’s home and got into an altercation with Denver Lee Gibson. Police say Collins shot Gibson once in the arm and fled in a purple Pontiac G6.

Neighbors said Gibson, 52, of Whitesburg, ran to a nearby home and knocked on the door, telling them he had been shot and needed an ambulance, then ran away again. He was transported by ambulance to the helipad at Whitesburg ARH Hospital, and flown to Pikeville Medical Center, where he was in stable condition.

Adams was not home at the time, but police were searching for him for probation violation. He was under supervised probation until 2021 for a methamphetamine charge, however the state Department of Corrections lists him as “absconded.”

Collins, who has not been found, is also wanted for absconding probation on theft, trespassing, malicious mischief and burglary charges, as well as for the shooting.

Gibson was on parole from a sentence for methamphetamine possession.